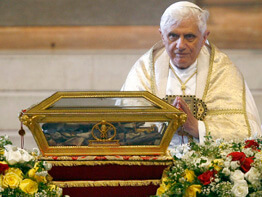 PAVIA, Italy – Paying homage to one of the most important figures of the church, Pope Benedict XVI prayed at the tomb of St. Augustine and called him a “model of conversion” for Christians of all ages.

Although conditioned by the passions of youth and the habits of his time, St. Augustine sought the truth – and that led him inevitably to faith, the pope said at a Mass April 22 in the northern Italian city of Pavia.

The pope’s two-day visit to Pavia and Vigevano, south of Milan, was packed with events: outdoor Masses in both cities, brief encounters with young people, a visit to a hospital and medical center, a university address and a prayer service in the church where the relics of St. Augustine are preserved.
It was Pope Benedict’s most extensive pastoral visit in Italy, and tens of thousands jammed the streets in each of the small cities to catch their first in-person glimpse of the German pontiff.

For the pope, it was above all a personal pilgrimage to the final resting place of a theologian who inspired his own thinking. As a young priest in 1953, the pope wrote his doctoral thesis on St. Augustine’s teachings.

More recently, he has cited St. Augustine frequently in papal discourses and documents, and a key theme of his pontificate – the need to appreciate and return God’s love – reflects St. Augustine’s statement that Christ came “mainly so that man might learn how much God loves him.”

In a homily to some 15,000 people gathered at a riverside park in Pavia, the pope explained why he found the saint so inspiring and such a good example for modern people. Born in North Africa in the fourth century, St. Augustine for many years ignored the counsel of his Christian mother and led a hedonistic lifestyle before converting and being baptized in Milan at the age of 33.

The pope said St. Augustine’s spiritual awakening was not an overnight event but a continual process, which was ultimately successful because he never stopped trying to find out “where we come from, where we are going and how we can find the true life.”

The pope said a second stage of his conversion came when, after his ordination as a priest, St. Augustine was called upon to preach publicly – a development that required him to translate his “sublime thoughts” into the language of the simple people.

A third phase of the conversion came even later when, as a bishop, St. Augustine revised and corrected his previous works, a sign of his own humility, the pope said.

At an evening liturgy in the church of San Pietro in Ciel d’Oro in Pavia, the pope stood in prayer before a crystal urn that holds the 226 bone fragments of St. Augustine. Then he lit a new votive lamp for the tomb.

In a sermon, the pope said St. Augustine had his eyes opened by an awareness of God’s love, which is “the heart of the Gospel, the central nucleus of Christianity.” It was also the theme of his own encyclical, “Deus Caritas Est” (“God Is Love”), which owes much to the thought of St. Augustine, the pope said.

Serving Christ, the pope said, is essentially a question of returning God’s love through acts of charity, with special attention to the material and spiritual needs of others.

He said the church exists to educate people in love and bring them to spiritual maturity.

“The church is not a simple organization of collective events nor, on the contrary, the sum of individuals who live a private religiosity,” he said.
“The church is a community of people who believe in the God of Jesus Christ and who commit themselves to implement in the world the commandment of charity which he left them,” he said.

The pope began his trip with a three-hour stop in Vigevano, a city that had waited nearly 600 years since the last papal visit. Greeting young people before the Mass in the town square, the pope urged them to find a friend in Jesus Christ.

“Don’t hesitate to trust in him: meet him, listen to him and love him with all your heart. In your friendship with him, you will experience the real joy that gives meaning and value to existence,” he said.

At the Mass in Vigevano, the pope said family values represented the foundation of society and the key to social reform. His remarks were greeted with long applause, prompting him to add, “I see we’re in agreement.”

Vigevano is a shoemaking center, and local industrialists made a gift of 15,000 pairs of shoes for the pope to send to poor countries. They added something for the pope himself – a pair of deep red loafers.

When he arrived in Pavia the evening of April 21, the pope was thronged by well-wishers as he rode his popemobile to the town square to address young people. Chants of “Benedetto” rang out in the singsong style that Italian young people had often cheered his predecessor, Pope John Paul II.

Pope Benedict’s visit, however, was mostly a series of quieter moments. He stopped outside San Matteo hospital in Pavia, where he greeted sick people at the end of a public ceremony, blessing them and whispering a few words to each.

In a speech, the pope said scientific and technological progress in health care must be accompanied by respect for human life in all its phases.

“The hospital is a place we could, in a sense, call ‘sacred,’ where the fragility of human nature is experienced, but also the enormous potential and the resources of human ingenuity and technology in the service of life,” he said.

Speaking at the University of Pavia, one of Italy’s oldest and most prestigious centers of learning, the pope said St. Augustine’s work testified to the importance of the interaction between faith and culture and of the dialogue between faith and reason.

He asked the university’s teachers and students to contribute to the “cultural project of Christian inspiration” that the church is promoting in Italy and in Europe. The pope and other church leaders have waged a campaign for greater awareness and recognition of Europe’s Christian heritage.