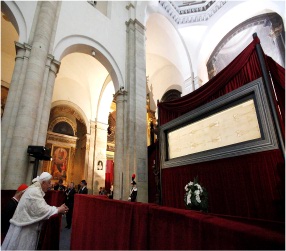 TURIN, Italy – The Shroud of Turin is an icon of “the most radical solidarity”: Christ sharing the loneliest moment of human existence by lying in a tomb, Pope Benedict XVI said after he knelt in silent prayer before the linen cloth.

The pope did not discuss the authenticity of the shroud as the cloth used to wrap the dead body of Jesus, but he said it clearly “is a burial cloth that wrapped the body of a man who was crucified in a way corresponding completely to what the Gospels tell us of Jesus.”

Pope Benedict paid a daylong visit to Turin May 2, celebrating an outdoor Mass, venerating the shroud in Turin’s cathedral, meeting with young people and visiting the sick.

During his evening visit to the exposition of the shroud, which is on public display until May 23, the 83-year-old pope said that while he has seen it before, this time there was a special “intensity, perhaps because the passing of years has made me more sensitive to the message of this extraordinary icon.”

The Bible accounts say that Jesus was in the tomb from Friday night to dawn on Sunday – a time that was “chronologically brief, but immense, infinite in its value and meaning,” the pope said.

For a day and a half, Jesus’ body lay dead in the tomb and it appeared as if God had hidden himself from the world, the pope said.

Most modern men and women have had the experience of God seeming to hide from them and from the world, he said. Even if they cannot explain their feeling in those terms, they experience “a void in their hearts that spreads,” he said.

“After the two world wars, the concentration camps and gulags, Hiroshima and Nagasaki, our age became increasingly a Holy Saturday,” the day when Jesus’ body lay lifeless in the tomb, the pope said.

“We have all had the frightening sensation of having been abandoned, which is precisely the part of death that makes us so afraid; like children we are afraid to be alone in the dark and only the presence of a person who loves us can reassure us,” Pope Benedict said.

As with a “photographic document” with a positive and negative image, he said, the shroud conveys that “the darkest mystery of faith is at the same time the brightest sign of a hope without limits” because it reminds people that Christ willingly embraced death to give all people the possibility of eternal life.

“The shroud is an icon written with blood: the blood of a man flagellated, crowned with thorns, crucified and wounded on his right side,” exactly as the Gospels say Jesus was, the pope said.

Visiting the sick immediately after venerating the shroud, the pope said that in the linen cloth, which is about 14 feet long and 43 inches wide, Christians see not only a sign of intense suffering, but also a sign of the power of the resurrection that transforms suffering into redemption.

“Living your suffering in union with the crucified and risen Christ, you participate in the mystery of his suffering for the salvation of the world,” the pope told the sick.

“By offering our pain to God through Christ, we can collaborate in the victory of good over evil because God makes our offering – our act of love – fruitful,” he said.

At the morning Mass in the city’s St. Charles Square, the pope said the shroud is a reminder that Jesus, who died for the sins of humanity, also rose from the death.

In the shroud, “we see reflections of our suffering in the suffering of Christ,” he said. “Precisely for this reason it is a sign of hope: Christ faced the cross to erect a barrier against evil, to allow us to see in his resurrection an anticipation of that moment when, for us, too, every tear will be dried and there will be no more death, nor mourning, wailing nor pain,” he said.

On the eve of the pope’s visit, the Archdiocese of Turin said more than 1.7 million people had made reservations for a specific time to view the shroud up close during its April 10-May 23 exposition. The archdiocese also said it expected an average of 70,000 visitors each week to arrive without reservations; they are allowed to view the shroud from farther away in the central aisle of the cathedral.