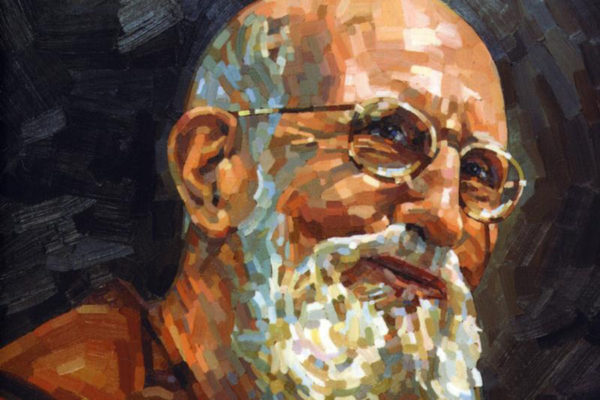 The likeness of Solanus Casey is seen on the book cover of "Thank God Ahead of Time: The Life and Spirituality of Solanus Casey." Pope Francis advanced the sainthood causes of the Wisconsin-born Capuchin priest. (CNS)

The pope approved the decrees during an audience May 4 with Cardinal Angelo Amato, prefect of the Congregation for Saints’ Causes.

Father Casey (1870-1957) was known for his great faith, humility and compassion and for his ministry as spiritual counselor. He gained a popular following during his lifetime, with healings attributed to his intercession both before and after his death.

He was the sixth of 16 children of Irish immigrant parents. He was born on a farm near Oak Grove, Wisconsin, and as a young man worked as a logger, a hospital orderly, a streetcar operator and a prison guard before entering the Capuchins at age 26.

He was ordained in 1904 as a “simplex priest,” one who is unable to hear confessions or preach dogmatic sermons because he had not performed very well in his studies. He carried out humble tasks in the monastery and, while serving in Yonkers, New York, Father Casey was assigned to be the friary’s porter, or doorkeeper, a ministry he would carry out for the rest of his life.

He was known to be gentle, approachable and genuinely concerned for people as he had unique insight into people’s needs and how they fit into God’s plans.

Among the other decrees May 4, Pope Francis recognized the heroic virtues of Cardinal Nguyen Van Thuan, who served as president of the Vatican’s Pontifical Council for Justice and Peace from 1998 to 2002 – the year he died.

Born in 1928, Vietnam’s communist regime jailed him in 1975 when he was the newly named coadjutor bishop of Saigon, later renamed Ho Chi Minh City. He was never tried or sentenced and spent nine of his 13 years of detention in solitary confinement. His uncle was South Vietnam’s first president, Ngo Dinh Diem, a Catholic who was assassinated in 1963.

Also May 4, the pope recognized miracles that advanced the causes of three religious women toward beatification and the martyrdom of Lucien Botovasoa, a married man with eight children, who was also a Third Order Franciscan, teacher and a catechist at his parish in Vohipeno, Madagascar.

As the African island went from being a colonial outpost to an independent nation, Botovasoa was blacklisted as an enemy of the cause for independence and was killed in 1947 out of hatred of the faith.

Years later a village elder admitted on his deathbed to a local missionary that he ordered the murder of Botovasoa even though Botovasoa had told him he would be by his side to help him whenever he was in need. The elder told the missionary he felt Botovasoa’s presence and asked to be baptized.