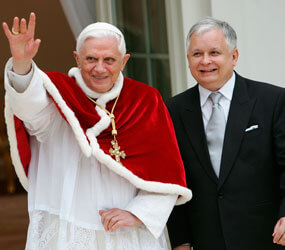 WARSAW, Poland – Poland’s Catholic primate has urged fellow citizens to see the death of Polish President Lech Kaczynski and 95 others in a weekend air disaster as a “dramatic challenge” to build “a fuller community” at the national level and with neighboring states.

“We are all asking ourselves the same painful question – how was this possible?” Archbishop Henryk Muszynski of Gniezno said at an April 11 Mass in his archdiocese.

“Why has a new drama been added to the greatest drama of the last war in the innocent deaths of our nation’s political and religious elites?” he asked. “We can expect the causes of this tragic accident to be explained directly in the future. But the wider question will no doubt stay unanswered, along with the pain and sadness not just of close families but also of all Poles.”

The plane carrying Kaczynski, top government and military officials and religious leaders crashed in heavy fog April 10 while attempting to land at the Russian airport of Smolensk.

The plane was carrying a delegation that was to attend a ceremony commemorating the Katyn Forest massacre, a Soviet massacre of more than 20,000 members of Poland’s elite officer corps 70 years ago.

The other passengers included the first lady, the head of the Polish central bank, the deputy foreign minister, heads of the Polish navy and air forces, the army chief of staff and nine clergy, including the Catholic archbishop who heads the country’s military archdiocese.

Archbishop Muszynski said the president had given an “eloquent testimony of endeavor and care throughout his life for faithfulness to Christ and history.”

“He knew the one whom he trusted and the one who was his hope was greater than the lure of despair and death,” Archbishop Muszynski said. “He certainly thought about his worldly political plans. But he was also aware that he was not master of life and death, and that someone else was directing the fate of peoples and nations.

“Everything great and lasting in life is built with effort, labor and sacrifice. This tragic accident at Smolensk is a dramatic summons to all of us to help build a fuller community both at a national level and with our immediate neighbors, so that the sacrifice of those who have died will not be in vain,” the archbishop said.

In an April 10 message, Pope Benedict XVI told Poland’s acting head of state, parliament Speaker Bronislaw Komorowski, that he had received the news with “deep pain.”

“I entrust all the victims of this dramatic accident – parliamentarians, politicians, military representatives and families of Katyn, as well as all the others – to the goodness of the merciful God. May he welcome them into his glory,” he said in the telegram.

Tributes and condolences were sent by U.S. President Barack Obama and other foreign state and church leaders, including Orthodox Patriarch Kirill of Russia, who said Katyn was a “place of common historical pain for both the Russian and Polish people” and would now also be associated with the latest air disaster.

Kaczynski, born in Warsaw in June 1949, taught law at Cardinal Wyszynski University after coming to prominence as a communist-era dissident and adviser to the Solidarity movement.

He was elected to Poland’s first senate in 1989 and later served as president of the national audit office, as justice minister and as mayor of Warsaw. He was elected president in October 2005 on a ticket that included adherence of the teachings of the late Pope John Paul II.

Kaczynski’s presidency was often controversial, marked by efforts to combat corruption and bring former communists to account, as well as a nationalistic approach to foreign policy.

The president’s twin brother, Jaroslaw Kaczynski, who traveled to Moscow to identify his body, heads the Law and Justice Party and served as prime minister in 2006-2007.

Memorial Masses for the disaster victims were held nationwide and among Polish communities abroad, as well as at Katyn Forest and in Russia and neighboring countries.

In an April 10 statement, the Polish bishops’ conference said the whole nation was “united in pain and suffering,” adding that Masses would continue for the victims throughout the week.

“A president, directly elected by the nation, is a personification of concern for what is most important in Poland in our tradition, animating our contemporary state interests,” the statement said.

“As Christians, we must view this national tragedy in the light of Christ’s resurrection, whose secret we experience in the church’s liturgy. May the victor over death open the gate of divine mercy to those who have died, soothe the pain in the hearts of those who weep for them, and strengthen a country united in pain with his blessing,” it said.