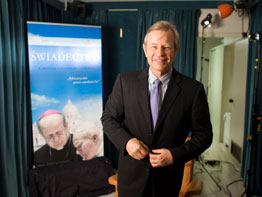 VATICAN CITY – Pope John Paul II was lightly wounded by a knife-wielding priest in Portugal in 1982, one year after a gunman tried to kill him in St. Peter’s Square, according to one of the late pope’s closest aides.

The disclosure came in a biographical film screened for the first time at the Vatican on Oct. 16, the 30th anniversary of Pope John Paul II’s election. Pope Benedict XVI and many of the world’s bishops were in attendance.

Titled “Testimony,” the film is based on a book of memoirs by Cardinal Stanislaw Dziwisz of Krakow, Poland, who was the late pope’s personal secretary for 39 years, until the pope’s death in 2005.

In the film, Cardinal Dziwisz recalled that the pope went to the Marian sanctuary of Fatima, Portugal, in 1982 to thank Mary for saving his life in the 1981 shooting. During an evening ceremony, a priest carrying a large knife lunged toward the pontiff.

At the time, Vatican officials said the pope was unharmed and was only informed about the incident the next day.

In the film, Cardinal Dziwisz said the pope was in fact able to carry on with the prayer service and the rest of his schedule in Fatima.

“It was only when we returned to his room that I saw blood on his vestments,” the cardinal added. He did not elaborate, but other Vatican sources said the pope may have been superficially wounded in the attack.

The 90-minute film, narrated in English by the actor Michael York but dubbed in Italian for the Vatican screening, used actors to depict scenes from the pope’s life along with historical video footage and still photographs.

Cardinal Dziwisz recounted how he and aides would spirit the pope out of the Vatican on secret outings to the mountains near Rome, sometimes hiding the pontiff behind an opened newspaper in the back of a car.

In one of the most dramatic re-enactments in the film, the pope performs an exorcism on a woman brought to him thrashing and screaming. Cardinal Dziwisz said the woman was possessed, and only when the pope told her he would celebrate a Mass for her did she suddenly become calm.

Some of the film’s most poignant moments came when Cardinal Dziwisz revealed simple facts about the pope’s day-to-day life in the Vatican: how each morning he read the prayer intentions that had been sent to him and placed on his kneeler, then spent a long time praying for them; how he was upset by the fact that homeless people were sleeping on the Vatican’s doorstep, and so asked Blessed Mother Teresa to open a charity shelter inside the Vatican; and how he brought Polish traditions to the Vatican, especially at Christmas.

The pope would sing aloud at least one Christmas song a day for several weeks, beginning Christmas Eve, he said.

The film drew the biggest round of applause when it showed then-Cardinal Joseph Ratzinger – now Pope Benedict – embracing the pope many years ago.

At the end of the screening, Pope Benedict addressed the several thousand people in the Vatican’s audience hall and told them the film had allowed them all to relive the moving story of Pope John Paul, who “from heaven is certainly with us.”

“The film reveals Pope John Paul’s human simplicity, his resolute courage and finally his suffering, faced right up to the end with the strength of a mountaineer and the patience of a humble servant of the Gospel,” he said.