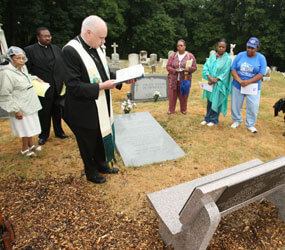 As their shuttle made its way from one historic site of their order to another, not even a rare summer downpour could dampen the spirits of the Oblate Sisters of Providence.

Its members were among those in a June 10 pilgrimage in honor of Mother Mary Lange. Led by Oblate Sister Marcia Hall, the pilgrimage began at the Oblates Motherhouse and stopped at the gravesites of Sulpician Father James Joubert and Mother Lange, the co-founders of the order; the original home of the sisters, and at St. Frances Academy, the school she founded.

This particular pilgrimage will likely stand out for the sisters, as they were accompanied by Archbishop Edwin F. O’Brien.

At New Cathedral Cemetery, he blessed a resting bench of meditation at Mother Lange’s grave.

“I am grateful for what the Oblates have done and what they stand for in our community,” Archbishop O’Brien said. “This pilgrimage is to thank God for those graces, and to stir up more goodness through the years to come.”

Dr. Marie-Alberte Boursiquot, vice president of the Mother Lange Guild board of directors, is hopeful that some of that goodness will result in Mother Lange’s canonization. Boursiquot saw the pilgrimage as another step in that lengthy process.

“This pilgrimage is an opportunity to pray, especially for the advancement of her canonization,” she said. “For her to come here and defy the oppression of being a black, intelligent woman is just remarkable.”

Mother Lange was born in the early 1780s. It is believed that she was born in Haiti and moved to Cuba with family. By 1818, as a well-educated woman, she was using her own funds to teach black children in her home here in Baltimore.

With the help of Father Joubert and others, she started the first black Catholic school in the United States.

“She’s a patronage for Catholic education in this country,” Archbishop O’Brien said.

It is the hope of those supporting her canonization that her dedication to education will play a huge role in the process. Cardinal William H. Keeler petitioned Rome to open a cause for her canonization in 1991. Since then, her supporters have taken trips to Haiti and Cuba to gather information on Mother Lange, which has since been submitted to Rome.

“Getting her canonized will be challenging – we have a few limitations,” Boursiquot said. “She didn’t leave a lot behind when it comes to writing. But her legacy that she’s left behind is the order; her legacy is the school. We have living people we can point to as her legacy.”

Though he agrees it won’t be easy, Archbishop O’Brien thinks the task is attainable.

“I do think she has the qualities to be a saint,” he said. “It’s going to be a rocky road and we have to be patient. But we’ll work at it – she never gave up and we can’t either.”

Patience may indeed be required. According to Boursiquot canonization efforts can take as long as 30, 50, even 100 years. She doesn’t anticipate Mother Lange’s supporters waiting that long.

“I’m grateful we have the archbishop’s support,” she said. “I’m hopeful that we’ll see this cause advance in the next few years. We’re very excited about this process.”

At the conclusion of the pilgrimage, the bus returned to the Oblate Sisters motherhouse. The sisters yearn for one more stop to be made – Rome, the land of sainthood, for their founder.