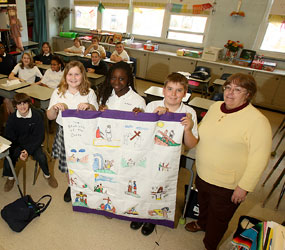 For 20 years, former school parent Arlene King has enriched the celebration of Black History Month at Mount de Sales Academy, Catonsville, by creating an exhibit for the students.

Mrs. King said she hopes to inspire the students to admire and emulate these heroes.

Her daughter Rolena King is a graduate of the class of 1990.

The winning entry for grades four-eight was titled “The World Deserves the Golden Rule, Too,” in which the door depicted a recycling vehicle picking up recyclables with “samples” filling the bottom of the door.

Teacher Mary Belz said, “Each homeroom did a wonderful job of illustrating the unique personality of their class. I am impressed by the thought and hard work my students put into this project, and in awe of their creativity.”

St. Clare faculty and students hope their message encourages other schools and individuals to improve the environment by recycling.

Seventh-graders at St. Michael the Archangel, Overlea, are now pen pals with a very small school off the coast of Japan, situated on an island with a population of 600, slightly more than the enrollment at St. Michael.

Excited with the letter exchange, students have discovered many similarities between interests, such as computer games, fishing, sports, song artists and movie stars. “Hopefully this will continue and build international friendships,” wrote Corinna P. Sibiski, director of development, in an e-mail to The Catholic Review.

St. Joan of Arc School, Aberdeen, participated for the fourth time in Jump Rope for Heart in February, raising more than $5,000 for the American Heart Association. The church hall was set up to accommodate half the school in the morning; the other half jumped in the afternoon, in five activity stations: single rope, long rope, jump-the-shot, double Dutch, and Chinese jump rope. It’s the 30th anniversary for Jump Rope for Heart.

A March 8 annual Mass and communion breakfast sponsored by the Calvert Hall Alumni Association and the Men of Calvert Hall honored the golden anniversary class of 1959. Jennifer C. Healy; Hugh R. Williams, class of 1951; and Leo I. Welsh, class of 1960, were recognized with awards.

PEOPLE, PLACES, THINGS is compiled and edited by Suzanne Molino Singleton. Items for consideration should be e-mailed to ssingleton@catholicreview.org.