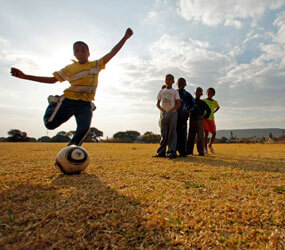 CAPE TOWN, South Africa – Soccer fans know all about the World Cup, the quadrennial competition taking place in South Africa that is sending people around the globe into a frenzy while boosting – or deflating – national pride.

Then there’s the Peace Cup west of Pretoria.

Coinciding with the monthlong World Cup competition that ends July 11, the Peace Cup is a Catholic-inspired tournament that gives soccer players from different social classes, ethnicities and national origins the chance to match up with one another on a level playing field.

Matches are played on Saturdays on a dirt-only field prepared by residents of the poorest part of Atteridgeville, a township that is home to about 200,000 people in the Pretoria Archdiocese.

Twenty-six teams are playing in the Peace Cup games, organized by Caritas Internationalis, the Vatican-based umbrella organization for Catholic humanitarian and development agencies, and the Franciscan interreligious Damietta Peace Initiative for the African continent. The South African Catholic Bishops’ Conference is a co-sponsor.

The teams are made up of local players, soccer fans from around the world who are in South Africa to watch the World Cup and refugees from African countries who live in and around Pretoria and represent 16 countries, according to a June 29 statement from the bishops’ conference.

The July 3 final was to be watched by official delegates from Ireland, France and Argentina. Spain’s ambassador to South Africa, Pablo Benavides Orgaz, watched the June 26 semifinals.

Residents of Atteridgeville have turned up in “huge numbers to watch their boys and men play,” tournament coordinator Martin Munde said in a June 29 telephone interview.

The township largely is without electricity “and so the fans coming to watch these games have no opportunity to watch the World Cup at the stadiums, fan parks or even on television,” he said.

The Peace Cup matches, one of which saw a team with most members originally from the Democratic Republic of Congo play one primarily with Tanzanians, have enabled “people here to feel the spirit of the FIFA World Cup,” Munde said.

“We have seen the results of integrating locals with refugees in teams and the spirit of friendship and respect for one another that playing together in this way brings,” he added.

The Peace Cup is “about appreciative and friendly relations rather than promoting any national pride,” said Franciscan Father Kees Thonissen, director of the Damietta Peace Initiative, in an article on the bishops’ conference website. “Peace is built on inner values such as mutual respect and appreciation of difference.”

He called the tournament “a modest attempt to bring about value change through the immediate experience of the ‘other’ as a human being with unique qualities and skills.”

A statement from the bishops said the Peace Cup “tries to highlight some of the major concerns of the Southern African Catholic community” such as the existence of “informal settlements, access to amenities, acceptance of refugees and migrants, and the need to be active agents in peace building.”

Although most of the players in the Peace Cup are between 18 and 35 years of age, Munde said the games have sparked an interest in soccer among younger children. Weekday games have been organized in parishes in the Pretoria Archdiocese to allow children to play together while their schools are closed until the World Cup concludes.

“We want to continue and extend the program after the World Cup,” Munde said, noting that “as well as a chance to play soccer, the program gives young people a platform to meet regularly” and discuss issues that concern them.

“When they need help with a particular issue, we can try to link them with someone in a position to give them that help,” he said.

Father Thonissen sees greater understanding across cultural and religious differences coming out of the tournament.

“Drawing on football as a peaceful mechanism that can break down prejudicial boundaries has already been fruitfully employed by the Damietta Peace Initiative in strife-torn Jos, Nigeria, where mixed teams of Muslims and Christians learned to build up solidarity across communal divides,” he said.