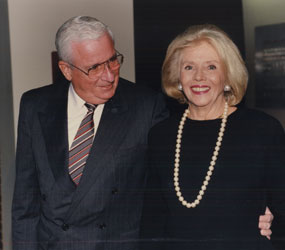 When Patricia Modell was presented the Pro Ecclesia et Pontifice Cross – a special papal honor, she called the recognition “absolutely wonderful,” but quickly added a caveat.

“I really don’t deserve this,” she told The Catholic Review in a 2004 interview. “I think you need to be a saint to get it.”

For many of Baltimore’s poor and vulnerable, Modell was an inspiration.

Together with her husband, Arthur Modell, former majority owner of the Baltimore Ravens, she supported a wide variety of Catholic and community causes. The Modells were contributors to Catholic Charities and the Partners in Excellence program that provides tuition assistance at city Catholic schools. They also supported the restoration of the Basilica of the National Shrine of the Assumption of the Blessed Virgin Mary in Baltimore.

“Mrs. Modell was a woman of deep faith, and she lived her Catholic faith
with great joy and always with kindness and compassion for others,” Archbishop Edwin F. O’Brien said in a written statement.

The archbishop offered “sympathy and prayerful support” to Arthur Modell and the Modell family “on behalf of the Catholic faithful of the Archdiocese of Baltimore and the people we have served through the benevolent goodness of Mrs. Modell.”

“We pray for the repose of her soul and for her eternal rest in the kingdom of God,” he said.

Patricia Modell told The Catholic Review that she attended the Cathedral of Mary Our Queen in Homeland. She had a special devotion to the Blessed Virgin Mary.

“I feel very blessed,” she said, “but that’s because the Blessed Mother is my best friend and watches over me and my family.”

Born in New York, Patricia Modell was named after Monsignor Patrick Breslin, her father’s eldest brother. She had a 22-year acting career and was cast in more than 400 motion pictures and television shows. She held the record for appearing in more television shows than any other woman in U.S. history until the record was broken by her friend, Lucille Ball.

Patricia Modell met Arthur Modell, then owner of the Cleveland Browns, when she was starring as Nurse Meg Baldwin on the TV soap opera General Hospital. The Modells married in 1969.

In Cleveland, Patricia Modell served on the board of Ursuline College and supported a wide range of charitable causes.

Kevin Byrne, senior vice president of public and community relations for the Ravens, has been a friend of the Modells since he began working for the Browns in 1981. He remembered that the couple shared faith traditions of Patricia Modell’s Catholicism and Arthur Modell’s Judaism.

“She became very close with Cardinal (William H.) Keeler,” Byrne said. “They would have the cardinal over to her house and they would go to the rectory with the cardinal.”

Patricia Modell was committed to supporting the arts and children who lacked opportunities, he said.

“She didn’t think enough people paid attention to both,” he said. “She tried to eliminate some of the unfairness.”

The Modells gave $3.5 million to the Lyric Opera House, which was recently renamed the Patricia and Arthur Modell Performing Arts Center at The Lyric.

Byrne said his friend had “a rare combination” of intelligence, a fun-loving spirit and feistiness. She loved football, he said, and wasn’t shy about expressing her opinions – especially on quarterbacks.

“She would be blunt saying, ‘We’re never going to win with that guy,’” Byrne said. “She’s been pretty right over the years.”

After seeing Baltimore quarterback Joe Flacco play for the first time, Patricia Modell told Byrne that she loved “Gucci” and that he was a man who could help the team win. The nickname stuck and she always referred to Flacco as “Gucci.”

UPDATE: Patricia Modell’s funeral will be held Oct. 17 at the Basilica of the National Shrine of the Assumption of the Blessed Virgin Mary.