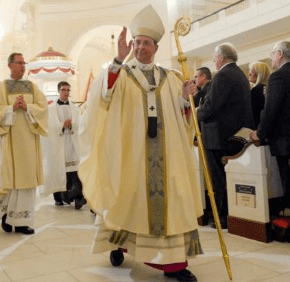 By Catholic Review Staff
Parishioners in the Archdiocese of Baltimore have gotten their first look at the proposed plan to create pastorates, a new way of bringing together parishes to evangelize their communities.
Priests in the archdiocese received an early look at the proposed model in late September. Their flocks saw the model via handouts featuring maps and other information at parishes as early as the weekend of Oct. 15-16.
Under the proposed model, each parish will be part of a pastorate that will have a single pastoral leader and leadership team. Pastorates will consist of a single parish or a group of parishes. Archbishop William E. Lori and archdiocesan staff have emphasized that just because parishes are grouped in a pastorate does not mean that a parish will be closed.
Conventual Franciscan Father Dennis Grumsey, in his sixth year as pastor of St. Casimir in Canton, has seen major structural change in a diocese before.
More than 20 years ago, he was assigned as the first pastor of Mother Cabrini Catholic Church in Shamokin, Pa., a consolidation of five parishes of the Diocese of Harrisburg, Pa.
Father Grumsey acknowledged that the plan in the Baltimore Archdiocese is different from the Harrisburg plan of two decades ago.
“(Archbishop Lori) is trying to create pastorates where the Catholic Church will be a present, live, vibrant church of which people are welcomed and invited to be a part, and then for us to take what we receive and go out and evangelize new people,” he said.
The proposed model calls for St. Casimir to join St. Brigid, also in Canton, and St. Elizabeth of Hungary in Highlandtown, several blocks to the north in the city, in a pastorate.
“I think it’s a necessary move, and I applaud the archbishop for being bold enough to begin this process,” said Conventual Franciscan Father David Kashen, pastor of St. Elizabeth for two years. He added that if the pastorates  result in more worshippers in churches, then that would improve the quality of worship.
“The churches are meant to have so many more people in them,” he said, noting that with a capacity for 500, there are typically 100 worshippers at a weekend Mass at St. Elizabeth.
He described his parishioners’ initial reaction to the pastoral plan as “a little hesitant.”
“Because we have a small parish, the first reaction is, ‘Oh, we’re closing,’ ” he said. “I have to reassure them – ‘No, we’re not. This is actually beneficial.’ ”
Father Joseph Cosgrove, pastor of Our Lady of Perpetual Help in Edgewater, said he spoke about the proposed model as part of his homily Oct. 16, and that it was mentioned at the end of Mass during a presentation on stewardship of the parish. Parishioners took home copies of the special supplement detailing the pastorate model. As proposed, Father Cosgrove’s parish would be in a pastorate with Our Lady of Sorrows, West River.
“People were interested in reading it and picking them up,” Father Cosgrove said of the supplement. He said the parish would hand out a survey the weekend of Oct. 23 and collect those surveys at the end of the month. The parish planned to provide time for parishioners to ask questions and provide feedback the weekend of Nov. 6 so that Father Cosgrove and members of his parish leadership could take their comments to a regional meeting with the archdiocesan Office of Pastoral Planning in early November.
In his address at the priests’ convocation in Ocean City Oct. 11, Archbishop Lori welcomed feedback on the planning process from priests and their parishioners.
“Constructive suggestions and active participation in the consultative process is good,” the archbishop said. “And indeed I’d truly encourage you and your staff to engage – and as we journey together we can learn from one another and we can make adjustments as necessary.”
Father Michael Triplett, administrator of Our Lady of Grace in Parkton, waited until the weekend of Oct. 22-23 to distribute the 16-page plan. The proposal pairs his parish with St. Francis Xavier in Hunt Valley.
“I think the vast majority will be in favor (of the proposal),” Father Triplett said.
“I’m excited about it. Like any change, there is going to be trepidation,” involving, what work this may create for the staff and parishioners, he said. “The good news is a renewed emphasis on finding healthy administrative (staffs). This allows us the opportunity to afford things we don’t have right now.”
Father Triplett likes the points Archbishop Lori has made, that the church prepares children for the sacraments and young adults to get married, but then there is often a gap in formation. “It’s important,” he said, “to make sure that people remain a part of  the community.”
He said another fear is closings, which is not a possibility for Our Lady of Grace or St. Francis Xavier. “Centralized collaboration makes that the reality. The goal is to create a strong unity,” Father Triplett said.
Christopher Gunty, Paul McMullen and  Erik Zygmont contributed to this article.
For the full planning supplement with maps and other information, visit BeMissionaryDisciples.org.