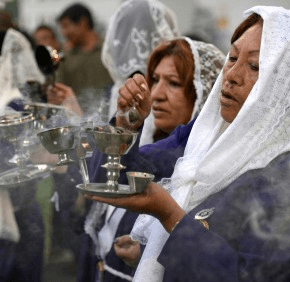 By Erik Zygmont ezygmont@CatholicReview.org
Twitter: @ReviewErik
Quantitatively speaking, the Women’s Education Alliance has benefitted Catholic Community Schools of the Archdiocese of Baltimore to the tune of $2 million in scholarships and other initiatives over the past five years.

“I get to pray at my school and learn about the Catholic faith, and that is very important to me,” said Nevaeh Lofton, a Holy Angels seventh-grader, addressing the audience at the WEA’s annual fall luncheon Oct. 18. “Many students attend schools and cannot pray at all. Prayer is very important.”

Nevaeh – her name is “heaven” spelled backward – also appreciates the worldly offerings of her school, such as 3-D printing and engineering programs as well as Spanish, art and music classes.

“My favorite subjects are math and science,” she said, “although my teachers think I do very well in English language arts, too.”

Women from across the archdiocese dedicated to improving educational opportunities for city children filled the vast multi-purpose room of Cardinal Shehan. In addition to hearing Nevaeh’s hopes and dreams – she wants to attend Cristo Rey Jesuit High School in Fells Point or The Catholic High School of Baltimore and become a neurosurgeon – the WEA heard a keynote from Carolyn Woo, outgoing president and CEO of Baltimore-based Catholic Relief Services.

Woo spoke on refugee children and their needs, a solid education being chief among them, with psychological/social care a close second.

As Iraqi forces are closing in on ISIS-occupied Mosul, she noted, parents are being told to tell their children that the frequent bombings are thunder.

Children are not unintelligent,  she said.

“They know the difference between bombs and thunder,” Woo explained. ” … These children have been through a lot.”

According to Woo, CRS is developing a classroom-curriculum – “Singing to the Lions” – specifically tailored to traumatized children around the world.

She said that when she speaks about the curriculum in the U.S., she gets an “inevitable” response from her audience: “You know what – we could use a curriculum like that, too, because we have children in the United States who are also traumatized.”

“While the causes are not always the same, the consequences of trauma on children are pretty much the same,” she said, adding that attention span, decision-making ability and the ability to accept delayed gratification are among the capacities diminished, long-term, by exposure to stress hormones.

Good schools, she continued, can ameliorate some of those consequences by offering safe spaces, promoting self-worth and cultivating good habits, as well as providing the education that leads to marketable skills.

“I have come to a hypothesis – not quite a conclusion yet – that in a society where there is no sense of God, people do not have a sense of self.”

As those made in the image of God, she added, it makes sense that we would care for each other, as God cares for us.

“What a privilege it is that God made us part of his promise that he would take care of his people,” she said.

Following her address, Woo presented a check for $2,500 from herself and her husband, David E. Bartkus, to Betty Contino, president of the WEA board.

In addition to Woo, Contino thanked all who have contributed monetary donations to WEA’s efforts, as well as those who have provided pro bono and volunteer work.

“By your efforts and support, miracles have been recorded,” she said.

In a video address, Baltimore Archbishop William E. Lori thanked WEA supporters, and also encouraged them “to continue giving generously” and to continue “participating in the mission of these schools that I can tell you are near and dear to my heart as your archbishop.”

Open Window Blog: Woo’s presentation is just what I needed to hear