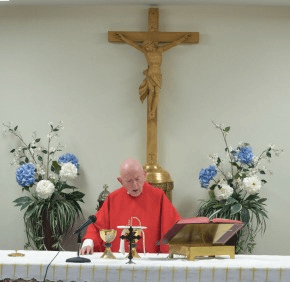 Those were among the takeaways from a Mass of thanksgiving celebrated Oct. 18 at Our Lady’s Center, which includes a chapel, a Marian shrine and Stations of the Cross tucked south of Route 40 in Howard County.

While it is located up the hill from historic Ellicott City, it did not escape the floodwaters that ravaged the area July 31, when two streams that border the center property overflowed their banks and did considerable damage.

She resides in Rockville, where he was raised and went to Georgetown Preparatory for high school. Looking for the perfect baptism gift for her granddaughter, Cora Justine Ferguson, she finally found the right picture book – at Our Lady’s Center.

In early August, hearing of the death and destruction in Ellicott City, she alerted her son.

“My Mom said, ‘this is a terrible situation,’ and I felt compelled to do something about it,” said Ferguson, a parishioner of St. Matthew in Northwood. “There had to be a way to help.”

He called Pierce J. Flanigan IV, the president of P. Flanigan & Sons, a Baltimore-based construction company that specializes in road infrastructure. Founded in 1885, its plants include an asphalt operation on Monroe Street, near Sandtown-Winchester, a reference point for both Flanigan and Ferguson.
“I thought back to April 2015,” Ferguson said in remarks, a reference to the riots in Baltimore that followed the death of Freddie Gray Jr. from injuries sustained while in police custody. “I was blown away by the help we (the city) received from other jurisdictions. I got on the phone with Pierce, and was just glad to be a conduit.”
Our Lady’s Center was facing weeks of closure, until Flanigan sent heavy equipment, project manager Richard Sanner and the equivalent of 125 man hours to remove storm debris that ranged from mud to strips of asphalt boulders as large as 3 feet in diameter.
“After Freddie Gray, I was struck by how everyone cares,” said Flanigan, who worships at Brown Memorial Presbyterian Church. “People asked, ‘How can we make the situation better?’ When we saw the news here, we wanted to help out in some way. We can fix parking lots and roadways. We can do that.”
With the crew from P. Flanigan & Sons restoring the picnic area and parking lots, Our Lady’s Center reopened in four days.

Jack Kissane, president of Our Lady’s Center, said Gov. Larry Hogan’s office coordinated other repairs through Howard County’s Department of Public Works. On behalf of the center, Kissane also thanked the Knights of Columbus, from the St. Agnes Council 4449 in Catonsville, and the St. Francis of Assisi Council 12524 in Fulton.
Kissane, a parishioner of St. Louis in Clarksville, also thanked Jim Schenk, a parishioner of Church of the Resurrection in Ellicott City, whose family-owned insurance business has found a second home at Our Lady’s Center.
“My brothers, Doug and Peter, are principals in the business,” Schenk said. “We come to noon Mass here just about every workday. One of our employees, Chris Yockey, became Catholic because of our witness.”
Those Masses are usually offered by retired Monsignor Joseph S. Lizor, the celebrant at the Mass of thanksgiving.
The July flood is not the first challenge to Our Lady’s Center, which opened in 1971, thanks to the Lancelotta family. In 2001, its original chapel was destroyed by fire. A new chapel, which includes pews repurposed from the Basilica of the National Shrine of the Assumption of the Blessed Virgin Mary in Baltimore, was completed and dedicated in October 2007.

New exhibition is feast for the senses at Walters Art Museum