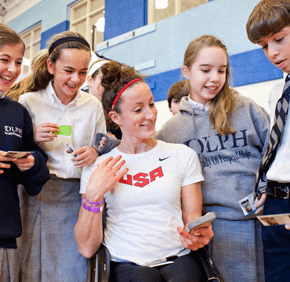 By Elizabeth Lowe
elowe@CatholicReview.org
Twitter: @ReviewLowe
ELLICOTT CITY – Austin Maltagliati, an eighth-grader at Our Lady of Perpetual Help School, has a new appreciation for people with disabilities after meeting a Paralympic gold medalist.
“I learned that being in a wheelchair isn’t easy,” said Austin, a parishioner of Our Lady of Perpetual Help. “A lot of things we do we take for granted. It inspired me how she can do it every day.”
Tatyana McFadden, a wheelchair racer who competed in the 2012 Summer Paralympics in London and has 10 medals, spoke to the student body Dec. 4 about overcoming adversity.
“I can do any sport,” said McFadden, whose backbone and spinal canal didn’t close before birth. “I have to adapt it to me.”
To view a slideshow, navigate the arrows below.
Born in St. Petersburg, Russia, McFadden was adopted at age 6 by Deborah McFadden, who also adopted Ruthi McFadden, a seventh-grader at the Ellicott City school. They live in Clarksville.
“It’s showing kids that you can do,” their mother said. “It’s teaching about life. Everybody has a gift and it’s looking for the gifts that we have.”
McFadden, who competed in the Paralympic games in Athens, Greece in 2004 and Beijing in 2008, proudly showed off a gold medal from London – and her muscular biceps – to students.
“I definitely had a dream,” the 23-year-old told students. “I started dreaming about this (being a Paralympian) when I was young like you guys.”
McFadden, who cannot move her legs, showed students how she moves from her wheelchair to her racing chair.
View a video below.

Eighth-grader Chloe Boustany was inspired.
“There’s some people who have to work three times as hard as you do,” she said.
Principal Victor Pellechia was among the faculty and students who played basketball in wheelchairs and participated in an obstacle course relay race.
“It’s very hard,” Pellechia said. “It takes practice.”
He called McFadden’s visit “an actual hands-on experience” and “a once-in-a-lifetime experience.”
“We need role models like this,” Pellechia said.
By the numbers
Total medals from Paralympics: 10
Gold medals: three
Silver medals: four
Bronze medals: three
Paralympics: three
Copyright (c) December 5, 2012 CatholicReview.org
PrevNext