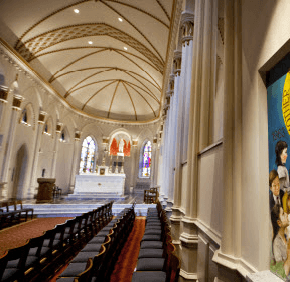 Sheridan “Dan” Reaver, a 1975 alumnus of Mother Seton School in Emmitsburg, and president of Emmitsburg Glass Company, was recently named a distinguished volunteer by the Association of Fundraising Professionals.

Reaver, whose children are alumnae of the Emmitsburg school, has remained involved with Mother Seton School, serving on the  board of directors and facility committee.

“It was an unexpected honor to receive the Distinguished Volunteer award,” Reaver said in a statement. “Thanks to the generosity of others, my siblings and I were able to attend Mother Seton School. I am glad that I am able to give back to the school and continue Mother Seton’s mission, especially helping those in need to receive the same education that I received.”

Daughter of Charity Sister JoAnne Goecke, the school’s principal, said in a statement that Reaver “exemplifies the spirit of generosity and caring he learned in his early years from his parents and as a student at MSS.”

“It is a joy and a blessing to witness the impact of how such a strong foundation nurtured at a young age can grow into such a prominent and generous leader in the community and at Mother Seton School,” she said.