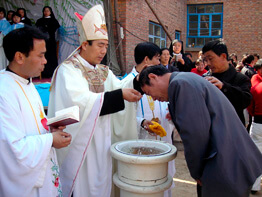 VATICAN CITY – In a groundbreaking letter to Chinese Catholics, Pope Benedict XVI established new guidelines to favor cooperation between clandestine Catholic communities and those officially registered with the government.

The papal letter strongly criticized the limits placed by the Chinese government on the church’s activities. But on several key issues, including the appointment of bishops, it invited civil authorities to a fresh and serious dialogue.

The 55-page letter, published by the Vatican June 30, was accompanied by a Vatican Press Office commentary that reiterated the Vatican’s willingness to move its nunciature from Taiwan to Beijing, as soon as diplomatic relations are established with China.

The letter was posted on the Vatican’s Web site in several languages, including traditional and modern Chinese, and had been sent earlier to Chinese authorities as a courtesy.

Throughout the text, the pope expressed his appreciation for the suffering of Chinese Catholics under communism. He said their devotion to the faith and their loyalty to the pope “will be rewarded, even if at times everything can seem a failure.”

Although the church in China enjoys greater religious freedom today than in the past, the pope said, “it cannot be denied that grave limitations remain that touch the heart of the faith and that, to a certain degree, suffocate pastoral activity.”

He asked for more direct contacts between church and state officials to resolve the problems and declared: “The Holy See always remains open to negotiations, so necessary if the difficulties of the present time are to be overcome.”

Most specifically, the pope formally revoked special faculties and pastoral directives that were established previously for the church in China. Vatican sources said that move effectively rescinded a 1988 Vatican advisory that had rejected the government-sanctioned Chinese Catholic Patriotic Association and regarded some of its members as non-Catholics.

The pope criticized the Chinese government’s interference in several areas of church activity and said its insistence on registering church communities and declaring them “official” had divided the church and given rise to suspicions, mutual accusations and recriminations.

But he effectively opened the door to registration with the government by bishops and Catholic communities, saying this was acceptable as long as it does not compromise principles of the faith and church communion.

On the other hand, the pope said, such registration has required some church leaders to adopt attitudes and perform actions that are contrary to their consciences as Catholics. Because the correct decision is difficult to determine and depends on local circumstances, the choice should be made by the individual bishop, he said.

Whatever the bishop decides, the pope added, Catholic faithful should try to maintain unity with their pastor. Rebuilding internal church unity, he said, may require Catholics to put aside “personal positions or viewpoints born of painful or difficult experiences.”

Examining the specific problem of concelebrated Masses, the pope said it was licit to concelebrate with bishops and priests who are registered with the Chinese government, as long as they are in communion with the pope and as long as their relationship with the government does not entail a denial of essential principles of faith and church communion.

The lay faithful in China must not hesitate to participate in these concelebrated Masses and in all the other sacraments carried out by such bishops or priests, he said.

While showing flexibility on a practical pastoral level, the pope was firm on the principle of non-interference by the state in church affairs. The attempt by some state-backed agencies in China to place themselves above the bishop and guide the life of the Catholic community “does not correspond to Catholic doctrine,” he said.

Likewise, he said, the Chinese Catholic Patriotic Association’s idea of an autonomous Chinese church that self-manages itself democratically is “incompatible with Catholic doctrine,” which has always professed the church to be “one, holy, catholic and apostolic.”

The pope said Catholics should remember that the preaching of the Gospel, catechesis and charitable activity, liturgical celebrations and pastoral decisions are the responsibility of a bishop and his priests acting in “unbroken continuity of the faith handed down by the apostles … and therefore cannot be subject to any external interference.”

The pope also addressed the thorny question of the selection and ordination of bishops. Disputing Chinese government arguments, he said that when a pope names bishops, it is an exercise of his “supreme spiritual authority” and not a political act. It is also a question of basic religious liberty, he said.

“The Holy See would like to be completely free to appoint bishops,” he said. He invited Chinese authorities to reach an agreement with the church in order to resolve the current situation, in which some bishops continue to be selected and ordained without papal approval.

As for the standing of current bishops, the pope outlined three situations:

– Some bishops, eager to maintain loyalty to the pope, have chosen to be ordained clandestinely, without government approval. The pope said that because the “clandestine condition” is not a normal feature of the church’s life, the Vatican hopes these bishops will be recognized by the government.

– Other bishops have been ordained without papal approval, but have later sought and obtained communion with the pope, who has granted it. Unfortunately, the pope said, in most cases the priests and faithful of the diocese have not been informed of the bishop’s reconciliation with the Vatican, giving rise to serious problems of conscience.

“For this reason it is indispensable, for the spiritual good of the diocesan communities concerned, that legitimation, once it has occurred, is brought into the public domain at the earliest opportunity, and that the legitimized bishops provide unequivocal and increasing signs of full communion with the successor of Peter,” he said.

– Finally, there are a small number of bishops who were ordained without papal approval and have not asked for reconciliation. The pope encouraged them to re-enter the communion of the church and noted that they exercised their ministry validly, if illegitimately.

Because the China Catholic Bishops’ College includes illegitimate bishops and excludes some bishops who are in communion with the pope, it cannot be recognized as a bishops’ conference by the Vatican, the pope said.

The letter, signed May 27, Pentecost Sunday, was addressed to the bishops, priests, religious and lay Catholics of China. At the beginning of the text the pope said the entire church in China was present in his heart and his daily prayers.

Pope Benedict quoted Pope John Paul II’s stated hope for a “great harvest of faith” in Asia in the third millennium. Modern China, Pope Benedict said, seemed to be experiencing an increase in spiritual interest on the one hand, and a tendency toward materialism on the other.

The church seeks to encourage and awaken the spiritual energies, and its evangelization in China will succeed to the extent that it puts love and unity into practice, he said.

The Vatican estimates there are currently between 8 million and 12 million Catholics in China, a number that continues to grow.

The pope also noted the growth in vocations to the priesthood and religious life over the last 50 years, saying it was a sign of the church’s vitality. At the same time, he called for more careful discernment of vocations and better formation of priests, particularly regarding celibacy.

The pope underlined that the church is not identified with any political system. Nor is it the church’s mission to “change the structure or administration of the state,” he said. It does not seek special privileges from China and its leaders, but “solely the resumption of dialogue,” he said.

At the end of his letter, the pope established May 24 as a day of prayer for the church in China, noting that it was the feast of Our Lady, Help of Christians, who is particularly venerated at a Marian shrine near Shanghai.