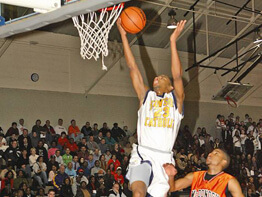 All season long, top-ranked Towson Catholic High School, Towson, focused on teamwork. It was a challenge for boys’ basketball head coach Josh Pratt, who had the tough job of balancing superstar-quality athletes with the greater good of a promising season, but he found a way to make it happen.

“What can I say,” said Coach Pratt. “We’ve just preached togetherness all season long and the kids have really responded.”

Cruising through the regular season within the Maryland Interscholastic Athletic Association A Conference with a record of 16-0 (28-4 overall), the Owls were on fire behind the dynamic senior duo of 6-foot-10-inch power-forward Donte Greene and 6-foot-4-inch shooting guard Malcolm Delaney. Greene and Delaney have combined for more than 1200 points on the year; both are deadly from the parameter but are absolutely dominating underneath.

Capping the Owls regular season was a 71-49 win over McDonogh School (22-8) Feb. 23 in the MIAA A Conference finals game at Gilman’s Finney Athletic Center. With standing-room-only in the house, Towson Catholic did not disappoint as Greene and Delaney both posted double-doubles to get the win.

With Greene heading to Syracuse University and Delaney to compete in the ACC with the University of Virginia next season, the Owls have a few more stops along the way before their season comes to an end with the Baltimore Catholic League Tournament tipping off this week and then off to Cumberland for the prestigious Alhambra Tournament.

Of special note, Donte Greene, averaging 18 points per game, has been named to the 2007 McDonald’s All-American basketball game.

According to Gary Adornato of the MIAA Web site, the last MIAA player to receive the honor was Archbishop Spalding High School’s Rudy Gay, who appeared in the 2004 contest and is now a member of the NBA’s Memphis Grizzlies. And, Greene follows in the footsteps of one his personal idols, former Towson Catholic superstar Carmelo Anthony of the Denver Nuggets, who was a McDonald’s All-American in 2002.

The McDonald’s All-American game will be played at Freedom Hall on the campus of the University of Louisville Mar. 28, at 7:00 pm. It will be televised live on ESPNU.