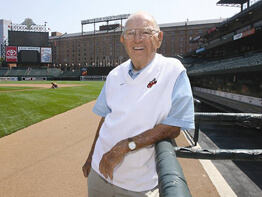 Witnessing the induction of former Baltimore Oriole Cal Ripken Jr. into the Baseball Hall of Fame July 29 was a heady experience for St. Ignatius, Hickory, parishioner Ernie Tyler.
While attending the Cooperstown, N.Y., festivities caused the 83-year-old to end a baseball era of his own – Mr. Tyler missed his first home game as an umpire’s attendant for the Baltimore Orioles since 1960– he said he could think of no better reason to end his 3,769-game streak.
“It’s actually a good feeling that my streak is over,” said the father of 11, whose number of in-season home games was posted at Oriole Park July 27, the game before he left for Cooperstown. “It takes the pressure off.”
The obvious comparisons between Mr. Tyler and the baseball great have been made by co-workers and former Oriole baseball players, since Mr. Ripken still holds the record of 2,632 consecutive baseball games played in the major leagues.
“Ernie has known Cal since he was a boy,” said Monica Pence, director of public affairs for the Orioles. “I think it was appropriate that he would break his streak for Cal.”
Mr. Tyler began his association with the Orioles in 1954 as a part-time usher at Memorial Stadium during the team’s first season in Baltimore.
Though he maintained a day job, the man who served as an altar boy as a youngster in his Charles Village neighborhood parish – Ss. Philip & James, Homewood – became a full-time usher in 1958 before moving into his current position in 1960, assisting the umpires before, during and after games.
Retiring from Maryland’s Department of Health and Mental Hygiene in 1988, Mr. Tyler continued working for the Orioles and didn’t miss a home game until the weekend of July 28 to see his former colleague with the same work ethic presented with one of baseball’s supreme honors.
In 2004 Mr. Tyler was named winner of the Herb Armstrong Award, presented by the Oriole Advocates’ Hall of Fame Committee to non-uniformed personnel who have distinguished themselves in service to the team, Ms. Pence said.
Armed with a cell phone during that fateful weekend in Cooperstown, Mr. Tyler did call the umpires working during the Baltimore games to make sure everything was running smoothly in his absence.
“Ernie’s approach is the same as Cal’s approach to his job,” said Al Bumbry, who played for the Orioles from 1972 to 1984. “Come into work every day and do an honest day’s work.”
It’s a philosophy the grandfather of 25 has maintained since he began working in the 1940s – never calling out sick for any job, he said, noting he had surgery in 1995 after his retirement from the state and during the off season of baseball, and recovered in time to return to Oriole Park when the new season began.
“I took vacations and scheduled personal days at my day job, but I’ve been very blessed with good health, for the most part, and didn’t have to take sick days,” Mr. Tyler said.
With no plans to retire from his baseball gig any time soon, he returned to Oriole Park Aug. 1 to help get things ready for the impending home games and doesn’t foresee another reason to take time off.
Continuing a life-long passion for sports, Mr. Tyler doesn’t view his duties at the ballpark as work.
As a home away from home, nine Tylers – including his wife, Juliane, and seven of their children – have worked for the club at one time or another and sons Jim and Fred currently serve as the home and visiting clubhouse managers, respectively.
“Everything in baseball is a fun job,” the spry 83-year-old said with a hearty laugh. “It has to be something special for me to want to miss a game.”