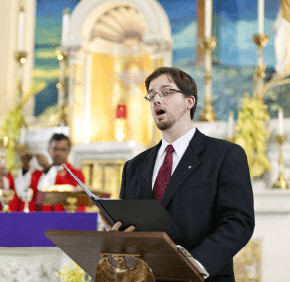 Christopher Rhodovi planned to join the military, but God had other plans. In 1996, one month before fulfilling his lifelong dream of joining the U.S. Army, Rhodovi received his one-and-only college acceptance letter from The Peabody Institute of The Johns Hopkins University in Baltimore.

“It was a sign – God wants me to study music,” said Rhodovi, 34. “I said, ‘I love music, let’s see where it goes.’ I started opening my eyes to the fact that there are other things in control that we don’t know.”

Rhodovi, a 2001 graduate of Peabody, has performed in operas in Baltimore, Annapolis and Washington, D.C. for the past 12 years.

The Mount Vernon baritone has also been a cantor at nearly a dozen parishes in the archdiocese since 2001.

Rhodovi is currently a cantor and bass section leader at Immaculate Conception, Towson; a substitute cantor at the Basilica of the National Shrine of the Assumption of the Blessed Virgin Mary in Baltimore; and a parishioner, cantor and music director at St. Leo, Little Italy.

Rhodovi’s wife, Karen Myers Rhodovi, is also an opera singer and a cantor at St. Leo.

Whether singing in church or on stage, Rhodovi relies on his training.

“There’s a distinct difference between what I do in church and on the opera stage,” Rhodovi said, “but they both stir me. I rely very heavily on my Catholic faith tradition to (cantor) and do it well.”

Rhodovi, who began singing as a child and was in chorus during high school, said being a cantor has “helped my faith grow” and allowed him to comfort people, particularly when singing at funerals. Cantoring also helps to preserve opera, Rhodovi said.

Now, Rhodovi said, opera singers are “fighting to keep it alive.”
“For whatever reason, opera has a difficult time attracting a younger audience,” Rhodovi said.

To support himself, Rhodovi has worked as a paralegal, waiter, barista and realtor. Since 2009 he has worked in admissions at Notre Dame of Maryland University in Baltimore, where he is pursuing a graduate degree in the nonprofit industry.

Rhodovi hopes performing can one day be his only occupation.

“I want to be able to sing as much as I can,” Rhodovi said, “and be happy and get paid for it.”
J Austin Bitner, also a Peabody graduate, cantor at Immaculate Conception and opera singer, said opera singing “allows for a more intimate connection with those you are singing to.”

“Often you’re not singing with amplification,” said Bitner, 42, of Reservoir Hill. “It allows you to connect to people in an intimate fashion. That is also the reason operatic singers make such wonderful cantors and can do the same thing with the scripture.”

Rhodovi approaches his job as a cantor “as an extension to being a parishioner,” Bitner said.

“As a cantor, you are also in a position of leadership for the congregation,” Bitner said.

“The way to accept it is to return it to God (and) to his people,” Father Furnari said.