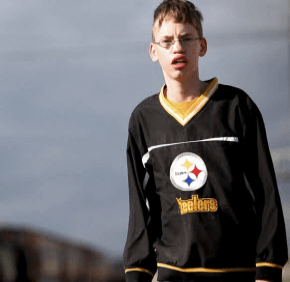 NEW YORK – With the poignant documentary “Bully” (Weinstein), filmmaker Lee Hirsch sheds light on a widespread and tenacious social problem and provides a valuable – though not unproblematic – starting point for important family discussions.

Hirsch reveals the victimization of a trio of teens from different parts of the country who have endured verbal and physical abuse from their peers at school. He also recounts, primarily through interviews with their grieving parents, the stories of two other students whose sufferings apparently led them to commit suicide.

Perhaps the most effective part of the movie is that which concerns a Sioux City, Iowa, seventh-grader named Alex. Wisely and effectively, Hirsch and his team simply trail Alex through his various experiences.

Thus we can hear him almost hyperventilating with dread as he prepares for the first day of a new school year. We later witness Alex’s fears being cruelly fulfilled as some of the other riders on his crowded school bus hit him, strangle him, stab him with a pencil and slam his head into the high backrest of the seat ahead of him.

Awkward in manner, and stonily uncommunicative with his parents, Alex unwisely jokes with the boy sitting next to him, at one point, that they are “buddies.” He’s met with a sadly predictable torrent of foul-mouthed abuse.

That doomed social gambit grows out of Alex’s determined conviction that his tormentors are actually his pals. Accepting the truth, of course, would mean acknowledging that he is, in fact, friendless. That’s a reality of which we catch a heartrending glimpse as we see Alex engaged in one of his after-school pastimes of choice: standing alone in a vacant lot watching freight trains pull into and out of the local train yard.

Adult administrators who appear on screen seem either indifferent or impotent. Kirk Smalley, the father of an 11-year-old boy who took his own life, by contrast, has become engaged in an energetic initiative: Together with his wife Laura, he has established a consciousness-raising movement called Stand for the Silent.

Considerable debate has been provoked by the Motion Picture Association of America’s original R rating for “Bully.” While their detractors – online and elsewhere – have argued that this classification bars precisely those who would most benefit from seeing the film, the MPAA presumably applied it based on the same objective criteria they use in evaluating every other picture, regardless of its social and aesthetic worth or lack thereof.

The distributors, who originally spurned the R in favor of releasing the film as unrated, have now made the edits necessary to earn their project a PG-13, though whether some of the vocabulary still spouted by the schoolyard barbarians would be allowed to pass in other films with that rating remains open to question.

The new classification stands, in a sense, as an invitation to youthful audiences. Before allowing their teens to accept it, parents should be aware that, in addition to the small-scale brutality on display, the narrative also focuses on the fact that one of those being profiled – a 16-year-old girl named Kelby – is enduring persecution in her small Oklahoma hometown for being an avowed lesbian.

We see Kelby embracing the schoolmate she identifies as her girlfriend. But we also learn that she has been expelled from her church, made the target of a slow-speed hit-and-run incident and prevented from participating in the team sports she loves – and which, she feels sure, would have earned her a college scholarship.

Accordingly, younger viewers will need sufficient maturity – or guidance – to distinguish between the individual rights of the homosexually oriented and a broader social agenda out of keeping with Scripture and sacred tradition. Still, after careful parental consideration, “Bully” may possibly be found, on balance, acceptable for older adolescents.

The film contains scenes of cruelty and petty violence, adult themes, including suicide and homosexuality, at least one use of the F-word and numerous crude and crass insults. The Catholic News Service classification is A-III – adults. The Motion Picture Association of America rating is PG-13 – parents strongly cautioned. Some material may be inappropriate for children under 13.