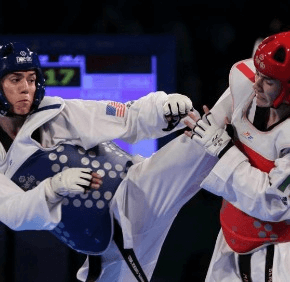 By Paul McMullen
pmcmullen@CatholicReview.org
Twitter: @ReviewMcMullen
The formation of Kyle Snyder, who is poised to become the first Marylander to win an Olympic gold medal in wrestling, includes a Catholic parish in Carroll County and a Catholic high school in Montgomery County.

That starts with his parents, Tricia and Steve Sr., who met as students at Atholton High School in Howard County, where her home parish was St. Louis in Clarksville. They were married by one of her uncles, Monsignor John Hogan, at Sacred Heart Church in Bowie.

Kyle Snyder defeated 2012 Olympic gold medalist Jason Varner at the U.S. Olympic Trials to earn a spot in the 2016 Games in Rio de Janeiro, Brazil. (Photo by Tony Rotundo, Wrestlers Are Warriors)
The Snyders eventually settled in Woodbine, and became parishioners of St. Joseph in Sykesville, where Tricia taught religious education and summer Bible study.“We were very involved when they (her children) were little,” she said.

Kyle is the second of four children. Stephen Jr., 23, is a graduate of the U.S. Military Academy at West Point, N.Y., and recently completed Army Ranger School at Fort Benning, Ga. Kevin, 18, will follow Kyle to Ohio State University, where the latter won an NCAA championship last winter. Megan, 15, is a rising sophomore at Century High School. All three Snyder boys went to Our Lady of Good Counsel High School in Olney.

“Anything that was going to challenge them was going to be worthwhile,” Tricia said of Good Counsel. “It was an amazing education. None of our kids went to college thinking, ‘Oh, this is going to be hard.’ “

One of the initial attractions at Good Counsel for Stephen Jr. was playing football for Bob Milloy, whose 382 wins over 44 seasons make him the most successful high school coach in Maryland history. Kyle wasted no time making an impression when he arrived as a freshman in 2011 and joined his big brother on the Falcons’ varsity football team.

“He started a couple of (varsity) games when he was a freshman, and I can count on one hand the people who’ve done that here,” said Steve Ghent, an assistant coach and physical education teacher who’s entering his 26th year at Good Counsel. “His leadership ability, from the start, was evident. He has such a natural skill, people follow his lead. “Kyle wasn’t a big talking guy. He was a big example guy.”

Snyder nonetheless dropped football to make an individual sport his priority. He had a 179-0 record in three varsity wrestling seasons for Good Counsel, then spent his senior year of high school in Colorado Springs, Colo., at the U.S. Olympic Training Center.

Snyder received an honorary diploma from Good Counsel last September, when he addressed the entire student body about his faith.

“He talked about his relationship with God, and stuff that should be way beyond his years,” Ghent said. “He had 1,300 people here eating out of the palm of his hand.”

Snyder became active in Bible study in Colorado. When he’s in Columbus, Ohio, he worships at Rock City Church.

“My goal is to live my life through my faith and Christ,” Snyder told the Catholic Review. “I want to live like him. That’s impossible, of course, because we all make mistakes.”

He has made few in his athletic career, as he was the youngest American ever to win a world championship, and beat the reigning Olympic champion at the U.S. Trials to earn a berth in the 2016 Games in Rio de Janeiro, Brazil.

The opening ceremony will be held Aug. 5. Snyder plans to march behind U.S. flag-bearer and Rodgers Forge native Michael Phelps, as he is biding his time for his competition, which begins Aug. 19. Sports Illustrated predicted him to take the silver medal, behind Russian Anzor Boltukaev.

Snyder’s parents will be there, among a group of 15 family and friends making the pilgrimage to Brazil. His mother, Tricia, got her first passport in early 2015, and will use it for the first time.