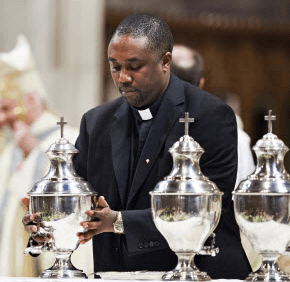 By Elizabeth Lowe
elowe@CatholicReview.org
Twitter: @ReviewLowe
Once Baltimore Archbishop William E. Lori blesses two oils and consecrates a third March 25, the oil will be taken to the undercroft of the Cathedral of Mary Our Queen in Homeland where about 40 volunteers will be ready to fill nearly 600 bottles with the oil – within an hour.
These volunteers at the cathedral call themselves “Chrism Mass Oilers.”
Three bottles are in each of the nearly 200 sets, brought to the cathedral to be filled for approximately 150 parishes in the Archdiocese of Baltimore and about 40 other institutions, such as hospitals, said Gail Fennessey, a cathedral parishioner and co-coordinator of the Chrism Mass Oilers.
“It’s quite an accomplishment. We have to have it filled by the time the Mass ends,” said Fennessey, who noted that small bottles hold about four fluid ounces and larger ones about eight fluid ounces. “We don’t let anyone into the room until we’ve finished filling the bottles.”
Monsignor J. Bruce Jarboe, rector of the cathedral, called the Chrism Mass Oilers “a wonderful ministry that is unique to our parish” and the chrism Mass “joyful” and “uplifting.”
The annual chrism Mass, coming in Baltimore one day after Palm Sunday begins Holy Week, includes the blessing and consecration of oils used for sacraments and rites during the upcoming year and a renewal of ordination promises for priests.
Thirty-six three-liter cans of extra virgin olive oil and eight 16 fluid ounce bottles of balsam came from a wholesaler, Monsignor Jarboe said.
During the liturgy, Archbishop Lori will bless the Oil of the Sick, which is used in the anointing of the sick, and the Oil of Catechumens, which is for those preparing to join the Catholic Church.
Unlike the other two oils, which are blessed, chrism is consecrated and used for baptism, confirmation and holy orders.
Balsam is added to ordinary olive oil to make it chrism, Monsignor Jarboe said.
Archbishop Lori will pour the perfumed balsam into the vessel, mix it with the olive oil, lean over the vessel and breathe onto the sacred chrism as a sign of the Holy Spirit.
“The sweet smell reminds us of the joy of being a disciple of Jesus and causes delight in our lives,” Monsignor Jarboe said.
He continued, “The church has always held that the material things of life can be used for spiritual purposes and oftentimes natural elements used in human life speak to spiritual realities that are important to us. Oil marks things that it touches, it makes a stain, a mark. The mark of Christian faith is an important one in our lives.”
View last year’s article and slide show of the chrism Mass
Copyright (c) March 22, 2013 CatholicReview.org
PrevNext