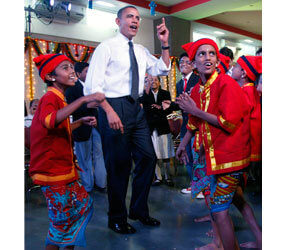 First, two groups of students at Holy Name School presented their science projects on the theme, “Caring for Creation.”

Later, the couple watched students’ dance performances as part of a celebration of the Hindu feast of Diwali, reported the Asian church news agency UCA News. When the students invited Michelle Obama to join them, she matched their steps of a traditional fishermen folk dance. Soon the children asked the president to join them and he, too, obliged.

“This was a memorable moment for me,” said Sudha Shinde, 12, one of the dancers.

Father Michael Pinto, principal of Holy Name School, said his students had “prepared well” and put up an excellent performance without a hitch during the president’s 40-minute program Nov. 7.

Obama also visited Jesuit-managed St. Xavier’s College, where he interacted with some 300 students from various colleges in the city. He fielded questions that ranged from topics such as midterm elections to spirituality.

Answering a question about how he viewed jihad, Obama acknowledged the word was subject to various interpretations within Islam.

“I think all of us recognize that this great religion in the hands of a few extremists has been distorted to justify violence toward innocent people that is never justified,” he told the students.

He said young people “can make a huge impact in reaffirming that you can be a stronger observer of your faith without putting somebody else down or visiting violence on somebody else.”

“I think a lot of these ideas form very early,” the president said. “And how you respond to each other is going to be probably as important as any speech that a president makes in encouraging the kinds of religious tolerance that I think is so necessary in a world that’s getting smaller and smaller, where more and more people of different backgrounds, different races, different ethnicities are interacting and working and learning from each other.”

The night before Obama arrived in India, widows and relatives of Indian farmers who committed suicide after being mired in debt demanded that Obama go home.

They staged candlelight protests in several parts of Vidarbha region in Maharashtra state Nov. 5. The protesters said U.S. policies had driven more than 200,000 farmers to suicide in India since 1999, when India introduced the U.S.-promoted Bt cotton seed, a genetically modified seed designed to grow cotton that resists the bollworm.

Salesian Sister Daya Mathew, who works among the farmers in Vidarbha, told UCA News that their condition is “very pathetic.”

All groups should come together to address the farmers’ issue and end “the cycle of genocide,” said the nun, who directs Nagpur Archdiocese’s social services.

The farmers resort to suicide because of “abject poverty” following crop failures and mounting debt, she said.

The church, she added, has launched several programs such as land treatment, water conservation and tapping various government plans to help the farmers.