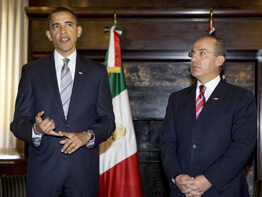 WASHINGTON – More than a week before he was to take office, President-elect Barack Obama met with Mexican President Felipe Calderon, prompting advice and recommendations about how the two leaders’ governments should be handling immigration, among other matters.

“The issue of illegal immigration transcends borders and must be addressed on a regional, if not hemispheric level,” Bishop Wester said in a statement released by the U.S. Conference of Catholic Bishops in Washington Jan. 12, the day President-elect Obama and President Calderon met.

The bishop said the long-term solution to illegal immigration “is not militarization of the U.S.-Mexico border, but economic development in poor nations. At a minimum, U.S. trade and international economic policies should not contribute to this forced migration.”

A meeting with the president of Mexico before or soon after the inauguration of the U.S. president has become something of a tradition for the neighboring leaders.

President-elect Obama and President Calderon held a private lunch at the Mexican Cultural Institute in Washington and met briefly with the press, describing their discussion only in general terms. They said they talked about organized crime, immigration reform, the financial crisis, energy and other hemisphere issues.

President-elect Obama was elected by a wide margin among Hispanic and immigrant voters and expectations are high for new approaches in dealing with immigration and policies that affect Latin American countries.

Bishop Wester’s statement reminded the two leaders that “migrants risk their well-being and lives to migrate in order to find work and support their families – it is a decision made out of necessity, not choice.” He encouraged President-elect Obama and President Calderon to “build bridges of cooperation, not walls of separation.”

The bishop also referenced a joint 2003 statement by U.S. and Mexican bishops in which they said Mexico also must reform its immigration laws and policies, “so that migrants from Central and South America are not subject to exploitation.”

Obama spokesman Robert Gibbs said the president-elect credited President Calderon with improving security in Mexico and pledged further efforts, especially in the border states of both countries, to eliminate drug-related violence and stop the flow of guns and money.

“President-elect Obama underscored his commitment to working with Congress to fix the broken U.S. immigration system and fostering safe, legal and orderly migration,” he said.

“He expressed his strongly held view that immigrants should be treated with dignity and that the immigration debate should not be a vehicle for vilifying any group, and that our two countries need to work more effectively to stop the flow of illegal immigration into the United States,” Mr. Gibbs said.