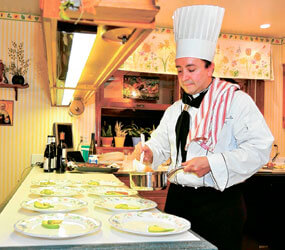 As his lamb dish sizzled in a pan, smoke billowed out from the stove, through the kitchen and into the dining room of the couple’s Harford County home. As a horn inevitably rang, Father Mateus-Ariza fanned the smoke and smiled as the Sanborns laughed and scurried to silence the alarm.

It was a small price to pay for a night of great eating.

The Sanborns, parishioners of St. Ignatius in Hickory, won the cooking services of Father Mateus-Ariza, by joining three other couples in a winning $2,000 bid during an auction at their parish’s annual crab feast.

“I always offer my services as a way to raise money for a parish,” Father Mateus-Ariza said after hours of preparation. “This is a beautiful kitchen, but I don’t know where everything is.”

He shuffled through drawers, cabinets and the refrigerator, all while wearing his priest’s collar under his chef’s uniform.

The impeccable presentation matched the high-quality taste of Father Mateus-Ariza’s cooking. He emphasized that meals should come with different textures for unpredictable tastes. Each time he entered the room with a new plate, an “Oh boy!” would rise out from the happy diners.

Father Mateus-Ariza’s philosophy is that dinner can be an extension of Mass, where families are nourished, share and support one another. Everything served was God’s creation, he said.

Following a stunning mahi mahi dish, he said, “That fish died for us to live.”

A food aficionado, Father Mateus-Ariza was inspired by the recent addition of a sprawling Wegman’s grocery store in Abingdon, about 15 minutes from St. Ignatius parish.

“For me,” he said, “it’s like going to Disney World. I don’t follow any recipes. I just go to Wegman’s and pick things out. I saw a plantain. I just grabbed it and thought, ‘What can I do with this?’ ”

Raised in Colombia, Father Mateus-Ariza followed his mother and grandmother around the kitchen as a boy as they prepared food. Meals took on deeper meaning.

“I love being with people and having them around the table,” he said. “I only cook when I’m not by myself.”

By the time he was 7, he was washing dishes in restaurants. Early in his life, he thought about pursuing the priestly vocation.

“I needed to work to work,” he said. “There was no other option, but I was always thinking there was something else.”

He cultivated his cooking talents during his 20s and became the executive chef to the Colombian president. During his 30s, though, he came to the United States and entered Mount St. Mary’s University Seminary in Emmitsburg.

Ordained in 2009 for the Archdiocese of Baltimore, he first served St. John in Westminster as associate pastor and in June was assigned to the same role at St. Ignatius. He enjoys getting to know parishioners and creating bonds through food.

He’s made friends with the Sanborns, who live on an expansive farm that includes cattle, goats, donkeys, ponies and chickens. They grow their own wheat, corn, soybeans and hay. Some of the animals, including ponies from Assateague, are rescued and brought to Jarrettsville.

“They come here through word of mouth,” Mary said.

After their Oct. 12 meal, the Sanborns were ready for one more permanent resident: Father Mateus-Ariza.

“We’re going to keep him,” Mary joked. “I told him he could live here for a while. He can come anytime he wants.”