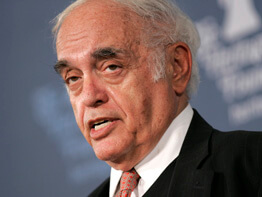 WASHINGTON – Syndicated columnist Robert Novak has made a living writing articles containing information from his carefully cultivated sources, and when he first became interested in Catholicism, it was, coincidentally, a former source who aided him in his conversion.
His story about a source turned priest who baptized him, as well as many other stories about his life and his work as a journalist, appear in his new book, “The Prince of Darkness: 50 Years Reporting in Washington.”
Novak was born Jewish and attended Christian services sporadically until the mid-1960s, after which he stopped going to religious services for nearly 30 years. But Novak said the Holy Spirit began to intervene in his life.
A friend gave Novak Catholic literature after he came close to dying from spinal meningitis in the early 1980s. About a decade later, the columnist’s wife, Geraldine, also not a Catholic, persuaded him to join her at Mass at St. Patrick’s Catholic Church in Washington. The celebrant was a former source of Novak’s.
Father Peter Vaghi, now Monsignor Vaghi and pastor of the Church of the Little Flower in Bethesda, Md., was a former Republican lawyer and adviser to Sen. Pete Domenici, R-N.M. He had been a source for the Evans and Novak column that Novak wrote with Rowland Evans.
Novak started to go to Mass regularly, but it wasn’t until a few years later that he decided to convert to Catholicism. The turning point, as he recounts in his book, happened when he went to Syracuse University in New York to give a lecture. Before he spoke, he was seated at a dinner table near a young woman who was wearing a necklace with a cross. Novak asked her if she was Catholic, and she posed the same question to him.
Novak replied that he had been going to Mass each Sunday for the last four years, but that he had not converted.
Her response – “Mr. Novak, life is short, but eternity is forever” – motivated him to start the process of becoming a Catholic through the Rite of Christian Initiation of Adults. He was baptized at St. Patrick’s Church in 1998. His wife was also baptized a Catholic.
Novak said he believed the Holy Spirit led him to Catholicism. He told an audience at the Heritage Foundation in Washington Aug. 2 that when he was interviewed by The New York Times about his book the interviewer scoffed at his story about his source turned priest.
But Novak said he told her he believed the Holy Spirit was behind the coincidences.
“I consider this the only one true faith, so I believe the Holy Spirit led me to it,” Novak said. “Then the next day Pope Benedict (XVI) said the same thing.”
Novak, referring to a Vatican document released in July reaffirming that the Catholic Church is the one true church, quipped that he must have been right.
The rest of Novak’s 600-page book describes a life spent developing sources close to some of the most powerful people in American political life. He said he hopes his work has done a service for his country.
“I am proud of my journalistic philosophy to tell the world things people do not want them to hear,” he said.
At the end of his book, and at the end of his talk, Novak likened himself in some ways to Bertrans de Born, a medieval nobleman who stirred up strife and wreaked havoc by destroying castles and ravishing women. In Dante’s “Inferno,” this stirrer of strife is resigned to hold his head in his hands for the rest of his days.
Novak joked that he had not destroyed castles or ravished women, but said he hoped that, in his career, he had succeeded in “stirring up strife but not in wreaking havoc, so that I will avoid an eternity in purgatory with my head in my hands.”