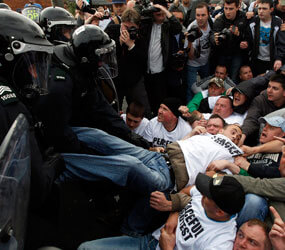 DUBLIN – Fresh intercommunity dialogue is needed to resolve the difficulties surrounding controversial parades in Northern Ireland, said a Catholic priest in Belfast, Northern Ireland, following the most serious outbreak of sectarian rioting in many years.

Dozens of police officers were injured during rioting as nationalists, mainly Catholics, protested a decision by the Independent Parades Commission to allow Protestants to march through the Catholic enclave of Ardoyne on their way back to North Belfast from parades in the city center.

Police, political and community leaders claimed that the violence was organized by dissident Republicans, members of the chiefly Catholic nationalist community, who are unhappy with the provisions of the 1998 Good Friday Peace Agreement.

Police video footage showed that the rioting was well organized: Youths had stones, bricks and bottles stored in rolling garbage bins and were armed with petrol bombs.

“There were people here yesterday and the day before whom I had never seen in Ardoyne before, and I have been living here for 10 years – they must have been bused in,” Passionist Father Gary Donegan of Holy Cross Catholic Church in Ardoyne told Catholic News Service in a July 13 telephone interview.

“No matter who started it, it quickly developed into recreational rioting,” said Father Donegan. “There were dozens of kids here texting their friends to come on up to North Belfast for a bit of fun; they were using Twitter and posting pictures on Bebo pages. Once the decision had been made to allow the Orange Order to march through Ardoyne, we were all in a lose-lose situation.”

The priest said marchers passed through Ardoyne in the morning, but by the time they were scheduled to return through the neighborhood, “the road was taken over by the mob, and then police in riot gear moved in and the trouble began.”

“Trouble was started by both sides,” he said. “This can’t continue; we need dialogue to ensure that this kind of trouble does not happen again. We prayed for a peaceful resolution at Mass today and we prayed for that policewoman who was seriously injured and that she would make a quick recovery.”

For decades, parades organized through Catholic areas by two Protestant fraternities, the Orange Order and the Royal Black Institution, have been a cause of intercommunity tension in Northern Ireland.

As part of the Good Friday Peace Agreement, an Independent Parades Commission was established, and its decision to ban or reroute the most controversial parades has reduced the level of public disturbances during the so-called Protestant marching season, when hundreds of parades take place between Easter and September.

The parades commission ruled that the Orange Order could march through Ardoyne this year because the level of intercommunity violence had decreased significantly in recent years.

In a statement read in Holy Cross Church July 11, before trouble began, Bishop Noel Treanor of Down and Connor – the diocese based in Belfast – said he would be praying for a peaceful resolution of tensions while he was away on an annual diocesan pilgrimage to Lourdes.

“I know that in recent years many of you have worked with fellow Christians from other churches and traditions, community leaders, politicians, statutory organizations and the police, to bring about a better community, social and economic environment for everyone in the area. This has involved the sometimes slow and challenging work of promoting mutual understanding, good neighborliness and patient mediation of conflict,” the bishop’s statement said.

“I appeal to you all to continue on this path. Together with you I ask that only words and actions be used that advance the immense progress in community relations and quality of life from which all have benefited in recent years,” he said.