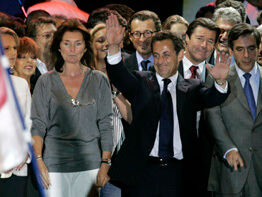 Sarkozy, the 52-year-old head of the Union for a Popular Movement political party, defeated Socialist Party candidate Segolene Royal in the French elections May 6, winning 51.3 percent of the vote.

The son of a Hungarian immigrant and a French mother with roots in Greece, Nicolas Paul Stephane Sarkozy de Nagy-Bocsa attended a private Catholic high school and describes himself as Catholic but an infrequent churchgoer.

“I am of Catholic culture, Catholic tradition, Catholic faith,” he said in his 2005 book, “The Republic, Religions and Hope.” “Even if my religious practice is episodic, I acknowledge myself as a member of the Catholic Church.”

Sarkozy’s maternal grandfather, with whom the family lived after his father left his mother, was a Sephardic Jew from Greece who converted to Catholicism when he married a French Catholic woman in 1917.

French Catholics reacted cautiously to the election of Sarkozy, who ran on a program of public sector reforms and curbs on crime and immigration.
“Mr. Sarkozy has personally identified himself as a Catholic and made repeated references to this,” said Ludovine de la Rochere, spokeswoman for the French Catholic bishops’ conference.

“As a politician, however, he has understood the general importance of religions in French political and social life, whether Christianity, Islam or Buddhism,” she said. “This has given him a significant advantage.”

But a Catholic commentator said France’s Catholic bishops had “clear differences” with Sarkozy on issues such as immigration, and predicted the new president’s reform plans could be a “cause of conflict.”

“Although everyone will want to give him a chance, the bishops will voice clear disagreement if he adopts hard-line policies in opposition to the church,” said Remy Nelson, a Catholic radio editor from Nancy.

“Church leaders are sometimes suspicious of politicians who stress their Catholic identity,” he added. “Sarkozy should also show he’s Catholic in his decisions and isn’t just using this to win votes.”

Sarkozy, who succeeds President Jacques Chirac after 12 years in office, has pledged to shake up France’s economic, administrative and educational infrastructure, as well as improve ties with the U.S., combat global warming and work to renew the European Union while permanently excluding Turkey.

Born in Paris, Sarkozy was baptized a Catholic and trained as a lawyer before being elected to the town council of Neuilly-sur-Seine, a Paris suburb, at age 22. When he became the town’s mayor in 1983 at 28, he was the youngest mayor in France.

He served from 1993 to 1995 as minister for the budget under Prime Minister Edouard Balladur and was interior minister and then finance minister under Prime Minister Jean-Pierre Raffarin in the early 2000s.
Twice-married and the father of three, Sarkozy has quoted Pope John Paul II and praised Europe’s Christian heritage in press statements, while also calling for limited state funding of churches and mosques.

In an April 21 interview with France’s Catholic weekly, Famille Chretienne (Christian Family), he said Christianity had “seen the birth” of the French nation, and contributed “an immense patrimony of cultural, moral, intellectual and spiritual values.”

Meanwhile, in a May 4 interview with another Catholic magazine, Le Pelerin (The Pilgrim), he said France was a “secular country,” adding that his Catholic convictions would not “directly influence” his political program.

However, he added that he would not “call into question the institution of marriage” or support adoption rights for same-sex couples, and would also seek extended palliative care as an alternative to euthanasia.

“The Catholic Church is in its element when it recalls the obligation to defend the weak and persecuted – I’ve always said religions must participate in society’s debates and give them clarity,” Sarkozy said.

Although the U.S. State Department says approximately 85 percent of France’s 61 million inhabitants are Catholics, fewer than one in 10 attend Sunday Mass, and 40 percent of the population denies any faith.

In a late March speech at Lourdes, the bishops’ conference president, Cardinal Jean-Pierre Ricard of Bordeaux, said the church could not “give orders” to voters, but added that France needed “strong convictions, and a vision of mankind which is clear about defending rights and recalling duties.”

Meanwhile, in a May 4 Famille Chretienne interview, Cardinal Philippe Barbarin of Lyon urged Catholics to pray for the candidates, adding that key criteria for future policy would include defense of the family, workers’ rights and social cohesion.

– – –
Contributing to this story were Jonathan Luxmoore in Oxford, England, and Nancy Frazier O’Brien in Washington.