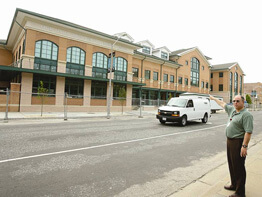 The new $15 million Our Daily Bread Employment Center and soup kitchen will not open to serve meals to Baltimore’s poor and homeless until June 4, but the halls of the three-story, 52,000-square-foot building are already filled with people.

Contractors worked to ready the new site at 725 Fallsway for its May 24 dedication and June opening. In addition to Our Daily Bread, the new center will also be home to Catholic Charities’ Christopher Place Employment Academy and Maryland Re-entry Partnership – a program that enables formerly incarcerated men to successfully reintegrate into the community.

Tom Mannion and nine co-workers from American Office in Baltimore have been unloading tables and assembling cafeteria and workplace stations since early May and expect to have their work completed by the time the men in Christopher Place, a residential program for formerly homeless men, move into the building.

Completion of the center has been long anticipated by Catholic Charities’ executive director, Hal Smith, who hopes the building will inspire Baltimore’s needy to work for a better life and for society to recognize it’s possible.

The exterior is designed to look like an old train station and Catholic Charities officials hope the perpetual-motion metaphor will spur the poor to direct their lives on a forward-moving track.

Though ground was broken in September 2005, plans had been in the works for years before.

Despite an unexpected discovery of an old grain shaft during the excavation process – the building has been completed on budget and just six months shy of the original finishing date.

The first floor will primarily house the Our Daily Bread meal and employment resource center, capable of feeding the 700-plus people who are currently served at its 411 Cathedral St. facility.

With a kitchen twice as large as the one in the current Our Daily Bread building, the new facility is constructed in a way that enables guests to walk past the employment resource center and the program information board as they exit the cafeteria.

“We’re hoping this will encourage more of them to take advantage of these resources,” said Dennis M. Murphy, director of the Our Daily Bread Employment Center.

Along with administrative offices for the Maryland Re-Entry Partnership, there is space for a myriad of services – such as legal aid and health-care services – for the homeless and needy to seek help in reforming their lives, Mr. Murphy said.

The second and third floors are primarily reserved for Christopher Place, allowing the program to grow from 42 to 60 available beds and offering the men additional space.

On the third floor will be three phases of living quarters.

Phase I is a three-room, 30-bed dormitory for homeless men just entering the 18-month-long program. Phase II is a 15-bed quarters with more personal living space for the employment-ready residents. Phase III has two three-bedroom apartments – one that holds nine beds and a second that holds six – for the men who are employed, but haven’t yet moved to transitional housing or their own private residence.

“The men from Christopher Place will be responsible for the maintenance and cleaning of the entire building,” Mr. Murphy said. “Why pay someone else to perform those services when these men are already living in the building? It will also instill good work habits, and give them pride in living in a clean and attractive building.”

The building’s operation will require up to 50 volunteers each day to serve as mentors, computer coaches, intake assistants, resume-writing helpers, resource referral workers and aids in the meal program, he said.

To prepare the people who are currently served at the Cathedral Street facility, volunteers will be handing out 1,500 back packs stuffed with information about the new services, the opening date and a map of how to get to the new building.

With its pristine interiors and views of a side reflecting garden and the city skyline, Catholic Charities officials are optimistic the setting will motivate people to improve their lives.

“The building is nice,” Mr. Smith said, “but the real heart and soul of what will go on there will come from the staff and volunteers.”