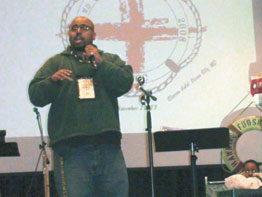 OCEAN CITY – Scott Miller walked over to Ansel Augustine Nov. 23 and planted a kiss on the top of his forehead.

“Thank you,” the Archdiocese of Baltimore’s coordinator of adolescent faith formation quietly told Mr. Augustine, who had just completed his final keynote address inside the Crystal Ballroom of the Clarion Hotel for the Baltimore Youth Catholic Conference.

It wasn’t just a speech for Mr. Augustine. It was a soul-baring explanation of the emotional journey that detailed the loss of home, family and friends in the wake of Hurricane Katrina in New Orleans.

“Young people, I told you my story not because I wanted you to feel sorry for me,” he said during his address. “That’s the last thing I want. I want you to know that no matter what you’re going through, especially when you’re in the toughest of times, God is always there.”

Mr. Augustine, the coordinator for Black Youth and Young Adult Ministries in the Archdiocese of New Orleans, said that no matter how many times he shares his loss there is a pain that lingers.

“They had thousands of people who were going through situations much worse than mine,” Mr. Augustine told The Catholic Review after his speech. “I know God will never give you more than you can bear.”

Mr. Augustine had spent the previous two days trying to connect with the mostly suburban audience attending the Baltimore Youth Catholic Conference, delivering a message to fight for Christianity’s survival. Often, he would refer to his audience as “church” and tried to engage them in a song popular in African-American churches.

“At first, it’s out of my element,” Mr. Augustine confessed. “The point is we’re all children of God. Everybody needs to know Jesus loves them. Who Jesus may be is different in the suburbs of Baltimore than who he may be in the inner city of New Orleans, but he’s still the same God who died for us and created us. We’re all made in his image and likeness.”

Reactions to Mr. Augustine’s celebratory style were stand-offish at first, but as he explained on the final day of the conference the pain of seeing loved ones dead, he broke through. Tears streamed down the cheeks of his audience.

Afterward, a young white teenager with a spiked Mohawk extended his right arm.