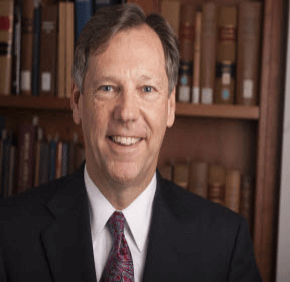 By Maria Wiering
mwiering@CatholicReview.org
Twitter: @ReviewWiering
WASHINGTON – Daniel Attridge had service in mind when he accepted an appointment as dean of the Columbus Law School at The Catholic University of America in November. It is an attitude that shaped his approach to the law profession, and that permeates the school he now heads, he said.
“I am here to serve the university and the law school, and in particular the students,” said Attridge, a parishioner of St. Mary in Annapolis.
After a transition period as dean designate, Attridge, 58, took the reins at CUA Law Feb. 1. Seven weeks into his new role, he envisions expanding the program – both in enrollment and partnerships within and beyond the university.
Like law schools across the country, the number of students at CUA Law has dipped in recent years. CUA used to have more than 950 law students; it now has 600. Attridge attributes the decline to media reports of rising loans and falling job prospects which question whether law school is “worth it.”
The silver lining is that current law school students are enjoying smaller class sizes and less job competition upon graduation, Attridge said.
“Ironically, for the right person going to law school for the right reasons, this is actually a good time to be going,” he said.
Attridge graduated from Georgetown University Law Center in 1979 and worked for a year as a law clerk for a judge of the U.S. District Court for the District of Columbia.
He joined Kirkland and Ellis, an international firm based in Chicago, in 1980, and became a partner in 1985. In 1998, he became the managing partner of the Washington office, where he oversaw more than 225 lawyers and 200 staff members. He continues to be affiliated with the firm.
Attridge has taught continuing learning courses through the District of Columbia Bar and the National Institute for Trial Advocacy and is an adjunct professor at Georgetown Law. As a litigator rather than an academic, however, his path to deanship is atypical.
CUA president John Garvey, a former law school dean, noted the fact in a November statement announcing Attridge’s appointment, when he said it was “rare” but “wise” to select the school’s dean from “one of America’s most distinguished law firms.”
CUA Law focuses on preparing its students to be “practice ready,” a goal Attridge hopes his background will enhance. His duties are mainly administrative, but he will also begin teaching in the fall.
As dean and professor, he aims to instill a duty to serve among the law students. The law school building’s exterior reflects this mission with an inscribed verse from Micah: “Do justice, love mercy and walk humbly with your God.”
“That is very much a call to action that these students, faculty and staff at the law school all have together,” he said.
Students are encouraged to do pro bono work and volunteer in the community while in law school and in their future careers.
For Attridge, service extends beyond law to other commitments, such as his role on St. Mary’s strategic planning committee. He also serves on St. Mary’s pastoral council and is a lector and an extraordinary minister of holy Communion.
“The reason I decided to do this is that the opportunity is one that uniquely combines my interest in law, my lifelong interest in education … and the opportunity to be of service to my church,” he said. “When you have your church, education and law all combined, that was a powerful draw.”
He and his wife, Missy, live in Annapolis. They have three adult sons.
Copyright (c) March 22, 2013 CatholicReview.org
PrevNext