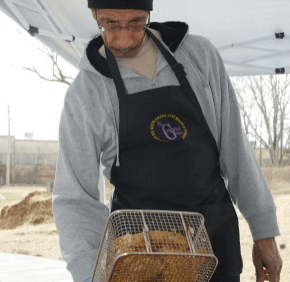 By Erik Zygmont
ezygmont@CatholicReview.org
Twitter: @ReviewErik
WOODLAWN – If it had been a whispering voice on a summer breeze that convinced the parishioners of St. Gabriel in Woodlawn to build their community center, it might have said, “Since they came, you need to build it.”
St. Gabriel parishioners – including large contingents of families from West Africa, Central America, the Philippines and India – love gatherings, said Monsignor Thomas L. Phillips, the church’s pastor, noting that a recent 1-year-old’s birthday party drew a crowd of 100.
“They use it as a reason to come together, meet each other again and share their lives,” Monsignor Phillips said. “We’re giving them a place to gather and celebrate that’s close to the church.”
After nearly eight years of fundraising and grappling with obstacles such as the global financial crisis of 2008, the St. Gabriel Community Center was officially dedicated Feb. 22.
“There have been a few finish lines we’ve had to cross in the process,” said John Wiggins, chair of the parish finance committee.
Starting under Cardinal William H. Keeler, then-archbishop of Baltimore, the parish raised substantial funding for the $1.3 million, 5,000-square-foot building. Then the Great Recession hit.
“In the downturn, the effort kind of tapered off,” Wiggins said.
Despite the hard times, St. Gabriel remained solvent.
“We’ve always had a lean budget, but we’ve always been in the black, year after year,” Wiggins said.
As the economy gradually recovered, St. Gabriel renewed the push and realized that its goal aligned with those of the archdiocese. In 2012, several parishioners went to the Catholic Center to request permission to combine the archdiocesan “Embracing Our Mission-Shaping Our Future” campaign with St. Gabriel’s capital campaign for the new building.
“We presented to Archbishop Lori and pretty much the whole crew,” remembered Wiggins. “It was a good presentation – everything was laid out on the table, from the business aspects to the personal to the emotional.”
Embracing Our Mission includes funding for specific parishes with substantial needs. The archdiocese set a $400,000 goal for the Embracing Our Mission portion of St. Gabriel’s campaign, and the parish set a $200,000 goal for its own building campaign. Parishioners went above and beyond, reported Wiggins, pledging $828,000.
Monsignor Phillips noted that, once the recession had been navigated and permission from the archdiocese granted, the construction itself proceeded smoothly.
“We moved right ahead,” he said. “It’s up now, and we give thanks to God for the accomplishment and will move on to use the building for its intended purpose – to welcome the many immigrants who are in our parish community.”
St. Gabriel recently hosted a fish fry. To view photos, navigate the arrows below.
The parish has its own Diversity Day, June 7 this year, when it celebrates parishioners’ diverse ethnic backgrounds with a special multilingual Mass followed by an international food festival, to be held on the parish grounds.
Monsignor Phillips said his international parishioners needed a common space.
“People who migrate usually spread out (when they come to America),” he said. “When there’s an event that pulls the whole family together, they travel far distances.”
Cindy Howard, chairwoman of the parish’s building committee, said that houses don’t cut it for such events.
“If you look at the homes in this community, we are basically ranchers with two or three bedrooms, but we don’t have that big family room, so everybody’s looking for that extended meeting area,” Howard said.
She added that there are already three graduation parties and seven baby showers booked for the center, which allows for three configurations of meeting space.
“We want a continued presence here,” Howard said. “It’s as much for the community as the parish itself.”
And that means that the community will get more exposure to St. Gabriel.
“It’s going to be a great instrument of evangelization,” said Monsignor Phillips.
Also see:
Empty Bowls, full hearts
Priests shine in celebration of connectedness
600 teen pilgrims brave cold to ‘Walk in Truth’
Western Maryland youths begin Holy Week reaching out to poor
PrevNext