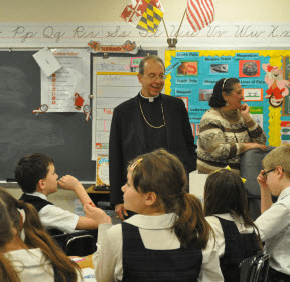 mwiering@CatholicReview.org
@ReviewWiering
FREDERICK – Standing on a stage in front of St. John Regional Catholic School’s student body, Baltimore Archbishop William E. Lori asked for questions.
Ethan Harman’s hand shot up.
“How was God formed?” asked the third-grader.
“This place is getting profound here,” Archbishop Lori said with a smile, before giving a serious answer.
“That’s the thing about God: He wasn’t formed,” he began. “God doesn’t have a birthday. God the Father, Son and Holy Spirit always existed, and always will exist.”
The visit to the pre-kindergarten-to-eighth-grade school was the second of three events the archbishop attended in Frederick County Feb. 22. He was the main celebrant of a morning Red Mass for Catholics in the legal professions at St. John the Evangelist in Frederick, and presided over the campus blessing of St. John’s Catholic Prep in the afternoon.
After a lengthy question-and-answer session at St. John Regional that also included queries about the pope, the role of an archbishop and whether Archbishop Lori would want to be pope (“No, but I’d like to go to the summer home at Castel Gandolfo and hang out there all summer.”), Archbishop Lori toured the school with principal Karen Smith and Father Keith W. Boisvert, pastor of St. Katharine Drexel, a parish that meets in the school.
It was his first visit to the 584-student school and parish.
Smith said Archbishop Lori’s visit made a valuable impression upon students, staff and faculty.
“Because he’s the leader of the church in Baltimore, it’s important for the students to able to meet him and for him to see the school firsthand,” she said.
After lunch, Archbishop Lori traveled 11 miles south to the new campus of St. John’s Catholic Prep in Buckeystown. Students, parents, teachers, school staff, benefactors and board members gathered in the school gym for an hour-long ceremony to bless and dedicate the new campus and thank those who contributed to its realization.
“It’s such a special occasion,” said Christopher Cosentino, principal of St. John’s Catholic Prep. “We’ve been waiting a long time for this to happen, and seeing it come to fruition is truly exciting.”
The 9th-to-12th-grade school moved from its former campus in Frederick to a building once occupied by St. Thomas More Academy, a pre-K-8 school that relocated to Middletown for the current school year. The new 40,000-square-foot campus opened Jan. 14.
St. John’s Catholic Prep began as St. John’s Literary Institution in 1829. During the assembly, school president Gordon Oliver rooted the occasion in the school’s 184-year history and the vision of its founder, Jesuit Father John McElroy.
“Throughout the nation’s ups and downs, St. John’s has stayed the course,” Oliver said in his opening remarks.
The ceremony included an abbreviated Liturgy of the Word before the blessing rite. In a homily, Archbishop Lori also praised Father McElroy and the school’s Catholic identity.
“Whether it’s located in downtown Frederick or Butterfly Lane or at this beautiful new facility, the foundation is the same – Jesus,” he said.
Senior Emma Davis, 18, said transitioning between schools was easy, but it was difficult for many seniors to leave the old campus behind.
“We had a lot of sentimental value in our old school,” said Davis, a parishioner of Holy Family in Middletown.
Davis’ classmate Rebecca Pazzanese, 18, said the new school is more spacious and technologically advanced than their old campus. For her, the formal blessing was “the official opening of St. John’s,” she said.
Archbishop Lori’s presence was “a big deal” for the students, added fellow senior Kirsten Oakes, 17.
“It brought everything into perspective,” she said.
Father J. Kevin Farmer, administrator of St. John the Evangelist, was among priests from the four-state area who attended the blessing and dedication. He called the campus a “fulfillment of a dream” for the school and its families.
“I think it’s very exciting for the region,” he said.
Also see:
St. John’s Catholic Prep opens its doors at new location
Copyright (c) Feb. 25, 2013 CatholicReview.org
PrevNext