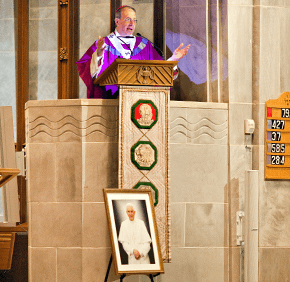 By Maria Wiering
mwiering@CatholicReview.org
Twitter: @ReviewWiering
Hundreds attended an evening Mass of Thanksgiving for the papacy of Pope Benedict XVI at the Cathedral of Mary Our Queen in Homeland Feb. 23, five days before the pontiff’s planned date of resignation.
Baltimore Archbishop William E. Lori, the principal celebrant, said the Mass was an opportunity to pray for Pope Benedict, his successor and the church.
In his homily, Archbishop Lori focused on the account of the Transfiguration in Luke’s Gospel. He outlined Pope Benedict’s own exegesis of the mountaintop meeting between Jesus, Moses and Elijah, and then reflected on what the Transfiguration reveals about Pope Benedict and his love for the church.
“In this Year of Faith, Pope Benedict has turned the gaze of the whole church to Jesus,” he said. “Again and again he reminds us that our faith is not about abstract principles or ethical ideals. No, at the center of our faith is the unique person of Jesus Christ.”
Pope Benedict announced his plans to resign Feb. 11, citing a lack of “strength of mind and body” to continue in the Catholic Church’s highest office. A conclave to elect his successor is to be held in March.
Pope Benedict was elected pope in April 2005 after the death of Pope John Paul II. The decision is unprecedented in the modern Catholic Church; the last pope to resign left office nearly 600 years ago.
Archbishop Lori responded in his homily to Pope Benedict’s critics who charge that the pope did not achieve necessary structural reform in the church.
“The need for a constant reform firmly rooted in the church’s teaching is undeniable, but let me suggest that Pope Benedict points to the one necessary thing: not ecclesiastical politics or administrative prowess but holiness, being overtaken from within by the glory of God shining on the face of Christ,” he said.
Concelebrating the Mass were Baltimore auxiliary bishops William C. Newman, Mitchell T. Rozanski and Denis J. Madden; Cathedral rector Monsignor J. Bruce Jarboe; and eight other priests.
The Knights of Columbus color guard, members of the Catholic Daughters of the Americas, and representatives from the Order of Malta and the Equestrian Order of the Holy Sepulchre of Jerusalem also attended the liturgy.
After the Mass, attendees expressed admiration for Pope Benedict’s humility and holiness.
Sister Mary Charles Culbertson, a member of the Society of All Saints’ Sisters of the Poor in Catonsville, said she admired Pope Benedict long before his papal election, when he was Cardinal Joseph Ratzinger.
“I have loved the man since I first got to know of him during Vatican II,” Sister Mary Charles said. “I’ve read quite a number of his books, and I was thrilled when he was elected pope when we were exploring entering the church.”
Formerly Episcopalian sisters, members of All Saints’ Sisters of the Poor joined the Catholic Church in 2009, during Pope Benedict’s pontificate.
John Baesch, 68, a member of the Catholic Community of South Baltimore, praised Pope Benedict’s theological writings and their “wonderful spirit of German clarity and order.”
The pope’s life has been an example of “the right order of things – our right relationship with God,” he added.
Anne Nelson, national regent for the Catholic Daughters of the Americas and a parishioner of St. Philip Neri in Linthicum, said Pope Benedict challenged the laity to become more “Christ-centered” while using their talents to benefit the world.
“He really showed by his example that prayer has to begin everything, and prayer supports everything,” she said.
Related articles:
Archbishop Lori’s Prayer for Pope Benedict XVI, the Church
Biographer: In past six months, pope was ‘exhausted and disheartened’
Copyright Feb. 24, 2013 CatholicReview.org
PrevNext