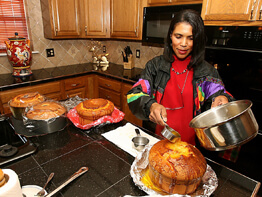 When approaching the front of Rita Martin’s Randallstown home, one can’t help but notice the attention the New All Saints, Liberty Heights, parishioner has given to the colorful Christmas decorations illuminating the house.

But it’s the aroma of baking rum cakes that really lets new arrivers know the spirit of the holidays is alive and well in the 50-year-old Baltimore City school teacher’s home.

In fact, Ms. Martin’s affinity for baking has earned her the nickname “the cake lady,” among parishioners.

From mid November through Christmas Eve, the New All Saints’ cake lady fills as many as 150 orders for the $20 rum-soaked treats. And as the cake batter rises, so too do funds at the Baltimore City parish. Ms. Martin donates all of profits to the church and raised $2,500 last year.

“They (fellow parishioners) call her an angel,” said Therese Wilson Favors, director of the Office of African American Catholic Ministries for the archdiocese. “She is a member of the welcoming committee and seeks ways to address the needs of the church and community.”

During a recent week night during Advent, Ms. Martin had four rum cakes baking in her twin ovens, in the newly remodeled kitchen constructed by her home-improvement-contractor husband of 12 years, James Martin.

“I’ve been baking this particular kind of cake for more than 25 years and giving them as gifts around Christmas time,” she said as she pulled the cakes out of the ovens and reloaded them with four batter-filled pans, each containing 1.5 cups of Bacardi Rum. “About six years ago I was trying to figure out how I could raise money for the church and someone suggested that I start selling my cakes.”

Armed with slices of the moist baked good, Ms. Martin handed out samples to parishioners of New All Saints and quickly took orders.

Her homemade treats have become a holiday tradition at the church and the money donated is a welcomed bonus.

Though she conducts her baking mission for the church at Easter too, the cake lady says it’s not as popular that time of year and usually ends up with only about 30 orders.
“I’ve been buying these cakes for about five years, and each year the number that I buy keeps going up,” said parishioner Shirley Johnson of Woodlawn, who placed eight orders this holiday season. “I buy them as gifts, and every year someone else gets a taste of them, then asks me where they can buy one. I just end up getting one for them too.”

Because the cake lady donates all of the money to the church, Ms. Johnson pointed out that parishioners who purchase the rum cakes are also contributing to the cause.

“So, it becomes a two-way mission,” she said. “Rita has provided people with an opportunity to support the church, and get a delicious cake at the same time.”

Early this year she won the 2006 Mother Mary Lange, OSP (Oblate Sisters of Providence) Service Award, prompting organizers of the event to label her mission as “focused” and “full of heart.”

During the holiday season, Ms. Martin comes home after teaching at Dr. Martin Luther King Jr. Elementary School near Druid Hill Park, puts together the ingredients, mixes her batter and begins to bake, sometimes completing 12 in an evening.

“That might sound like a lot of work, but I find it relaxing,” she said. “Once you get the cakes in the ovens, you have an hour and 10 minutes until they come out. I have my Christmas music playing, or my Christmas shows are on. It really helps me get into the Christmas spirit.”

Though her husband isn’t Catholic, Ms. Martin said he made it possible for her to bake twice as many cakes at a time this year by completing her new kitchen in time for the annual baking frenzy to commence.

“I know this is important to her and I want to support her in any way I can,” Mr. Martin said. “It’s for a great cause. I also help out by being her chief sampler. Now, you’ll never hear me complain about that job.”