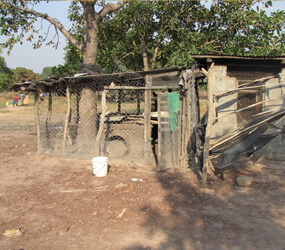 ALONG THE APPALACHIAN TRAIL NEAR LURAY, Va. – The 40-mph winds were whipping around 23-year-old Chris O’Keefe and the wind chill was below zero as he tried to cross from Georgia to North Carolina on the Appalachian Trail.

He tried to take a video to show the blowing snow, but his camera shut down from the cold. He struggled ahead, determined to hike across the state line in mid-February, but when he reached drifts over his head, he decided to head for shelter. So, using a compass, he bushwhacked down the mountain, reached a six-person shelter around 11 p.m., crawled – fully-clothed – into his bivvy sack and tried to sleep.

He recalled that as he tried to find his way down the mountain in the dark, he asked himself, “Why am I doing this?”

Two-and-a-half months later, O’Keefe was starting to get feeling and dexterity back in the ends of his once-frost-bitten fingers. And after a week off the trail for shinsplints, he was nearly halfway finished hiking the nearly 2,200-mile trail – all in an effort to raise money to help the Diocese of Rumbek, in southern Sudan.

“I think it (Sudan) is one of the areas that has suffered most in the whole world,” said the former Salesian Volunteer who spent nearly two years in the African nation.

Yet for all of their problems, Sudanese have a “resilient spirit” and are “very indefatigable,” he told Catholic News Service in early May.

The self-described “military brat” attended St. Charles Preparatory School in Columbus, Ohio, followed by an appointment to the U.S. Naval Academy in Annapolis, Md. He said that in 2008, toward the end of his sophomore year at the academy, he felt he “wasn’t quite leading the lifestyle … of a good Catholic, of an officer.”

“I was pretty self-absorbed,” he said.

He began researching volunteer opportunities, and when he called the Salesians, the man who answered the phone was a former Naval Academy midshipman who had left Annapolis to do mission work.

He decided that he, too, would leave the academy when he finished his sophomore year.

“I was told it was not a wise decision to make, and it turned out it was the best decision I’d ever made,” he told CNS. “I’d do it all again in a heartbeat.”

Months later, after an application process to the Salesians and some training, he was sent to Sudan.

“I wasn’t open to learning when I went over,” he said. “I was here to save the world.”

However, he added, “I wound up learning more in any case than I ever taught.”

His biggest lessons were in humility, he said, and he credits Italian-born Rumbek Bishop Cesare Mazzolari as being a fine example of humility. The bishop would get more done by being humble than others would accomplish by being arrogant and brash, he said.

“He would humble himself … and people would become like lambs and got the job done,” O’Keefe said with a chuckle.

O’Keefe started his service in the Diocese of Wau, where he worked in a clinic, helped remodel the clinic, helped develop a computer curriculum at a Salesian-run technical school, taught English and helped an elementary school physical education teacher – all within six months.

Because the need is so great, “you wear many hats,” he said. “I was a carpenter, mason, driver, teacher, logistician. I was essentially in charge of the medical clinic for a while.”

In Tonj, in the Rumbek Diocese, he was the supervisor of village schools that ranged from five new buildings to schools in the dirt.

“You sit in the dirt, draw in the dirt, and it’s a third-grader teaching a first-grader,” he said. One third-grader might be 25, while another is 8.The 8-year-old might help tutor the 25-year-old who, in turn, might provide protection from bullies for his younger classmate.

“Everyone there has a story” of life during southern Sudan’s 22 years of civil war that ended in 2005 with a comprehensive peace agreement between the northern-based government and separatist forces in the South. Some tell of being child soldiers; others tell of running from bombs.

He told of one priest who, with some Australian nuns, was arrested in the mid-1990s.The priest took 60 lashes so that the nuns would not have to be beaten.

O’Keefe speaks with a passion about the Sudanese people and the politics of East Africa.

“I’ve been shot at, I’ve been held at gunpoint, I’ve gotten malaria,” he said, adding that he would not hesitate to return.

But instead of going back, O’Keefe has reapplied, and been accepted, to complete his studies at the Naval Academy in the fall. He said he told academy officials he thought his time in Africa would help him be a better officer.

“In reality, the U.S. is getting involved in nation-building more than ever before,” he said, adding he would like other military officers to know, “You can make a positive impact.”

But before then, he hikes – sometimes up to 30 miles a day, hoping that by early summer he will be among the 25 percent who finish the trail that stretches from Georgia to Maine. He has set up a website – www.hikeforsudan.org – that describes the four projects toward which he is channeling all pledges.

And he talks about Sudan to people he meets along the trail, where he has earned the trail name Knee Deep for his hiking adventures, which began Feb. 8.

“Thinking about Sudan, the stuff I’ve been through in Sudan, the stuff the people of Sudan have gone through would help me keep pushing forward, keep pushing on, just by putting it all in perspective,” he said. Hiking through waist- and knee-deep snow in the cold “wasn’t really as bad as the stuff people have gone through in Sudan – the shootings, the violence – and that made it a lot easier.”