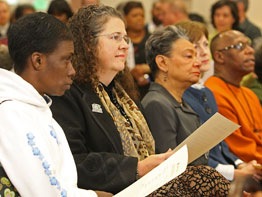 A narrow, cluttered row house that had served as a day shelter for homeless women and their children has been replaced by a gleaming new center in downtown Baltimore.

A $3.7 million renovation transformed the former home of Our Daily Bread into the 16,000-square-foot My Sister’s Place Women’s Center.

Archbishop Edwin F. O’Brien joined Catholic Charities leaders and others on Nov. 18 to dedicate the center, next to the Basilica of the National Shrine of the Assumption of the Blessed Virgin Mary.

“It’s no accident, I think, that this building virtually adjoins the first Catholic cathedral in the United States,” Archbishop O’Brien said. “As we cherish the divine there in the body of Christ, we cherish the divine within each one of those who knocks on this door, for they are loved by Christ. They are his sisters.”

Harold A. Smith, Catholic Charities’ executive director, said the center would help women “journeying along the path to independence.”

The center replaces the cramped My Sister’s Place day shelter on Mulberry Street as well as the former homes of two other programs: The Samaritan Center, which provides financial help for expenses, including rent and utilities, and Families That Work, which helps pregnant women so they can work soon after giving birth.

My Sister’s Place Women’s Center, built inside the skeleton of the former Our Daily Bread food program, looks and feels more like a hotel than a center serving homeless people.

The center also includes a children’s play area and facilities for showers and laundry and an outdoor courtyard.

At the Nov. 18 ceremony, members of the Catholic Charities Leadership Council poured water onto plants, symbolizing movement, growth, physical sustenance and the flow of God’s spirit.

“The whole idea of serving people with respect and dignity is something
Catholic Charities really endeavors to do, and I think our space really highlights that,” said Valerie Tarantino, the center’s program manager.

Letters etched in frosted glass on the façade set the tone for the center’s programs: “Welcoming Women to a Better Tomorrow.”