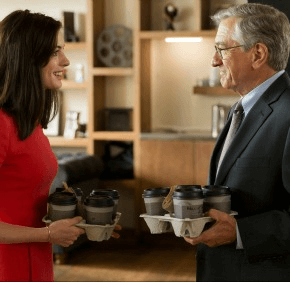 By John Mulderig
Catholic News Service
NEW YORK – Lit by the sunny disposition of its title character, writer-director Nancy Meyers’ generally affable comedy “The Intern” (Warner Bros.) could have provided families with a pleasant, though not especially memorable, visit to the multiplex.
Instead, the needless inclusion of some adults-only humor and the questionable amendments attached to her film’s basically moral agenda raise concerns about this project’s acceptability even for older teens.
Time was when the task of embodying elder wisdom on the screen fell to the members of the so-called Greatest Generation, the children of the Depression who went on to fight World War II. Now it’s 1943-vintage, not-quite-baby-boomer Robert De Niro’s turn to channel sagacity as 70-year-old retiree Ben Whittaker.
Feeling bored and isolated by retirement, sociable Ben enrolls in the internship program for senior citizens set up by Brooklyn-based online clothing retailer About the Fit. Assigned to assist the firm’s hard-driving founder and CEO, Jules Ostin (Anne Hathaway), Ben quickly discovers that his new boss regards him as little more than a nuisance.
That begins to change when Ben happens to spot Jules’ driver having a tipple on the job and discreetly volunteers to take his place at the wheel. As this improvised arrangement becomes more or less permanent, Ben works to capitalize on it by proving his professional worth to Jules.
Widowed Ben’s personal life also takes a turn for the better thanks to the stirrings of romance with About the Fit’s in-house masseuse, Fiona (Rene Russo). Ben’s first encounter with Fiona’s magical hands, however, degenerates into a potentially embarrassing occasion for him that also marks one of the movie’s infrequent but bothersome detours into tastelessness.
In between such regrettable interludes, Meyers showcases the synergy between the creative innovation of the young and the experience-based prudence of their elders, though the means she employs to do so sometimes ring false.
A subplot involving the strained relationship between Jules and her husband, stay-at-home dad Matt (Anders Holm), is ultimately resolved in a way that affirms commitment and fidelity. Yet the dialogue, at least, follows a twisting path before reaching this positive outcome. Though less substantial, Ben’s brief but upbeat memories of his own long-lasting match do serve to reinforce the overall pro-marriage message.
Like a brightly colored top that wobbles a bit as it pursues its course, mature viewers will find “The Intern” a mildly diverting – if not always reliable – source of passing entertainment.
The film contains a premarital situation, a nongraphic bedroom scene between spouses, intermittent sexual humor, a few rough terms, occasional crass language and an obscene gesture. The Catholic News Service classification is A-III — adults. The Motion Picture Association of America rating is PG-13 — parents strongly cautioned. Some material may be inappropriate for children under 13.

Movie Review: “A Walk in the Woods”