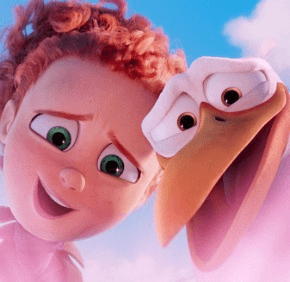 NEW YORK – Popular culture’s relentless drive to portray a homosexual lifestyle as merely one more form of diversity and its view of out-of-wedlock motherhood as a respectable choice, at least for mature women, mars the otherwise unobjectionable animated comedy “Storks” (Warner Bros.)
Though the images by which these messages are conveyed are brief, even teens who are not well catechized should keep their distance from the movie. (As the description that follows will probably make clear, however, they’re unlikely to be interested in it in the first place.)
Directors Nicholas Stoller and Doug Sweetland’s film (Stoller also wrote the screenplay) centers on an ambitious, can-do stork named Junior (voice of Andy Samberg).
Tapped by his boss, Hunter (voice of Kelsey Grammer), to take over the big-box store shipping system his breed now operates in lieu of delivering babies, Junior is on top of the world. At least, that is, until Tulip (voice of Katie Crown), a human orphan who was long ago stranded among the birds, derails his plans by accidentally setting the storks’ disused infant manufacturing machinery to work.
Together, Junior and Tulip scramble to get the child thus produced to her destined parents, Sarah (voice of Jennifer Aniston) and Henry (voice of Ty Burrell), and her young brother, Nate (voiced by Anton Starkman), before the potentially career-ruining mistake can be discovered.
Their odyssey is leavened with some positive, arguably pro-life, values. Since babies are cute, the unspoken, unabashedly sentimental, moral might be: Stuff in cartons is secondary. The film also benefits from a clever turn by Stephen Kramer Glickman voicing Pigeon Toady, the office nuisance who becomes the villain of the piece.
But the last-minute intrusion of the gay agenda, along with a misguided take on voluntarily chosen single parenthood, renders this occasionally funny but mostly awkward picture completely unsuitable for its target audience of kids. Only the brevity and passing nature of the inappropriate material keeps “Storks” from being objectionable for all.
“Storks” is preceded by “The Master,” a subpar martial arts-themed comedy short featuring Lego figures.
The film contains fleeting visuals endorsing homosexual acts and unwed motherhood and some potentially scary situations. The Catholic News Service classification is A-II — adults and adolescents. The Motion Picture Association of America rating is PG — parental guidance suggested. Some material may not be suitable for children.
Copyright ©2016 Catholic News Service/U.S. Conference of Catholic Bishops.
To see more movie reviews, click here.
PrevNext