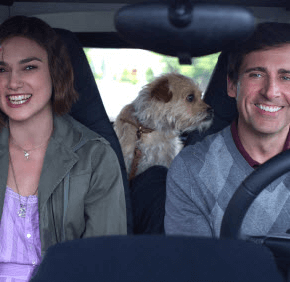 NEW YORK – Taken on its own humanist terms, the apocalyptic drama “Seeking a Friend for the End of the World” (Focus) is an essentially honorable film that celebrates the overarching importance of personal connectedness.

But the circumscribed nature of its outlook – amid the ultimate crisis, faith in God or in an afterlife is entirely absent – means that viewers will need to sift its heterogeneous moral content with careful discernment.

In her feature debut, writer-director Lorene Scafaria – who penned the 2008 screen version of “Nick and Nora’s Infinite Playlist” – presents us with Steve Carell as an Everyman observer of the End of Days.

Carell’s character, Dodge, is a soft-spoken conformist so risk-averse himself that his career selling insurance seems a natural fit. So he’s not especially well-equipped to hear the news that a 70-mile-wide asteroid is on course to obliterate all life on Earth within a few weeks, and that a space mission that offered the only hope of diverting it has failed. As for Dodge’s wife, she reacts to this turn of events by instantly deserting him.

Isolated and brooding, Dodge watches as the people around him respond to their doom in a range of predictable ways. Some – Dodge’s Hispanic housekeeper Elsa, (Tonita Castro), most prominent among them – insist on going about their daily routines as though nothing had changed. Others embark on alcohol- and narcotics-fuelled binges or seek solace in meaningless sex. Suicide becomes another out.

Thus the first part of Scafaria’s picture registers as a deeply cynical examination of how a secularized society, which normally ignores the inevitability of individual death, would react to the certainty of mass extinction.

Like Dodge himself, Penny (Keira Knightley), his free-spirited, British-born neighbor, is just plain scared. After Dodge, whose previous interaction with Penny has been marginal, comforts her one night, the two newfound friends set off on a road trip.

Dodge wants to reconnect with his high-school sweetheart. Penny hopes to find transport back to England (all airline flights have been discontinued) so she can devote her remaining time to repairing frayed ties with her semi-estranged family.

The tone of Scafaria’s script warms as its focus shifts to the deepening bond between this opposites-attract duo. (Dodge becomes increasingly conflicted between the search for his old flame and his kindling feelings for Penny.)

But the welcome affirmation of their increasing mutual affection is offset by less acceptable elements. One is Penny’s resolute insistence that the physical expression of love be treated casually in all circumstances. Another, of more sweeping concern, is the implicit message that, in a world without God, romance is the only source of salvation.

Yet, if the permanent death of the beloved is to be the unavoidable outcome of all such relationships, the “redemption” they offer – by contrast with that held out to us by the message of the Gospel – can be no more than passing, futile and ultimately unsatisfying.