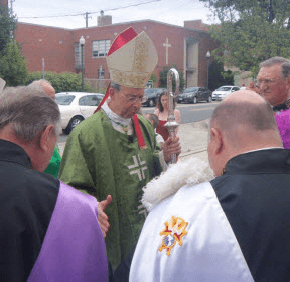 DUNDALK – Archbishop William E. Lori’s first visit to eastern Baltimore County was not a hurried one.

After celebrating a Mass that marked the 90th anniversary of St. Rita Parish in Dundalk June 17, the Archdiocese of Baltimore’s new archbishop was asked if he had time to remain for a dinner at the nearby Knights of Columbus Hall. Perhaps he could give the benediction before the faithful broke bread.

“The archbishop was a delight,” said Deacon John Langmead, the pastoral life director of St. Rita since 2006. “We had a lot of memorabilia on display and a lot of former parishioners come back, and he went to every single table (at the Knights’ hall) and visited with people.”

While steady jobs have dwindled at the Bethlehem Steel plant that helped birth the parish in 1922 and St. Rita no longer has the parish school that earned national Blue Ribbon distinction in 1986, Archbishop Lori nonetheless discovered a vibrant institution.

Where else can you find volunteers able and willing – every Monday night – to staff a soup kitchen such as the St. Rita Supper Table, which feeds and provides services to anywhere from 200 to 300 poor and homeless?

Archbishop Lori’s homily referenced that “good fruit” and the sacramental life of the parish, from baptism and marriage to reconciliation.

“How many, burdened by sin, emerge from confessionals renewed?” the archbishop asked.

Finally, he talked of holy orders.

“Hopefully, the day will come when I will be able to assign a priest to every parish,” Archbishop Lori said. “You and I are going to have to pray for vocations. If we want vocations, we have to pray for them.”

As the Catholic Review reported in May, the clergy shortage has led to a plan that will see St. Rita and three other Dundalk parishes unite under a single pastor by July 1, 2015.

As an interim step, Father George Gannon will become pastor of St. Rita July 1, while remaining pastor of Sacred Heart of Mary in Graceland Park.

Deacon Langmead, who served St. Rita as pastoral life director since January 2006, is retiring at the end of June. He and his wife, Carole, will relocate to Southern California.

“The parish has had some rocky years,” O’Donovan said, “but for the past five we have had a man who seemed to have the best interests of the parish at heart. He’s pitched a good game. We’re going to miss him.”

While a formal farewell for Deacon Langmead will be held after the 11:15 a.m. Mass June 24, Archbishop Lori took the opportunity from the pulpit to thank the Baltimore native and graduate of Calvert Hall College High School in Towson, who worked for NASA for 36 years.

Before the closing processional, Archbishop Lori paused to acknowledge the Servants of the Immaculate Heart of Mary, who continue to reside in the St. Rita convent, among them Sister Michael Marie Hartman, coordinator of adult faith formation for the parish.

“They were the original order staffing the school when it opened in 1926, and they were still here when the school closed in 2006,” Deacon Langmead said. “Four of them still live in the parish.

Deacon George Evans and Deacon Paul Mann, whose home parish is St. Rita, joined the celebration of the Mass, where Deacon Langmead spoke.

“Today,” he said, “we start our 91st year, and I anticipate even more of what God has blessed us with. We have a wonderful future ahead of us.”