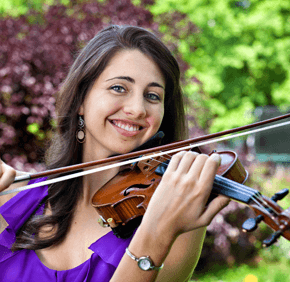 SEVERN – When Julia Irene Eva Menzies walked onto the sprawling Archbishop Spalding High School campus as a freshman, the brown-haired teenager from Potomac said she barely knew anyone.

Four years later, she leaves the Severn school as president of the Model United Nations, co-editor of the Spalding newspaper, a member of various Spalding choral groups and as the student selected to deliver the 2012 graduation speech.

The 18-year-old senior’s advice to incoming freshmen is simple. “Get involved with things you enjoy.”

Menzies, who will attend Stanford University in the fall, said she thinks “the worst thing you can do is be afraid to start something that is new to you or where you don’t know people.” She encourages students to explore their interests. “Doing things like that will make your high school years that much more enjoyable,” she said.

One of Menzies’ passions since the age of 7 has been playing the violin. She is a member of the Peabody Preparatory Program and has been in the Peabody Youth Orchestra for two years.

“It’s just a very nice release from things,” she said of playing. “I think it helps me focus and it relieves stress. It’s also a very social instrument and I was able to play in the orchestra at Peabody and do chamber music. So it’s really benefitted me.”

When she’s not practicing or performing, Menzies can often be found doing volunteer work.

The teen aspires to be a doctor and was also interested in visiting a developing country after hearing about her mother’s experiences working for the World Bank. So Menzies spent several weeks last summer in Ghana working for Unite for Sight in an unforgettable experience.

“It was like nothing I’ve ever done,” Menzies said. “It definitely made me value what I have. I learned a lot about what it means to practice medicine here and there.”

She said, for example, that when she shadowed doctors here in the United States and they performed cataract surgery, the cataracts were not very progressed. In Ghana, the cataracts would completely cover patients’ eyes.

Menzies became involved in a local hospital’s volunteer program two summers ago, working in the Joint and Spine Center helping patients recovering from surgery to complete physical therapy. She then transitioned to the Anne Arundel Medical Center Community Health Center where she said health care is provided at a much-reduced cost for those who are poor.

“It’s clearly a complete lifesaver in terms of the costs,” Menzies said. “It’s a really essential organization for the community and the people who work there are just so dedicated.”

In her graduation speech, Menzies told her fellow students they were that much richer for the experiences they had at Archbishop Spalding.

“Academically, every class I’ve taken has helped me grow,” she said. “And I’ve had some amazing teachers and been involved in many extracurricular activities. Taking religion classes and seeing the religious side of things has really helped me to grow spiritually.”

Menzies has family in the San Francisco area, and as a child she would ride her bike on the campus of Stanford. She told her mother then that she wanted to go attend the university, and in just a few months the teen will be California-bound for the next chapter in her life.