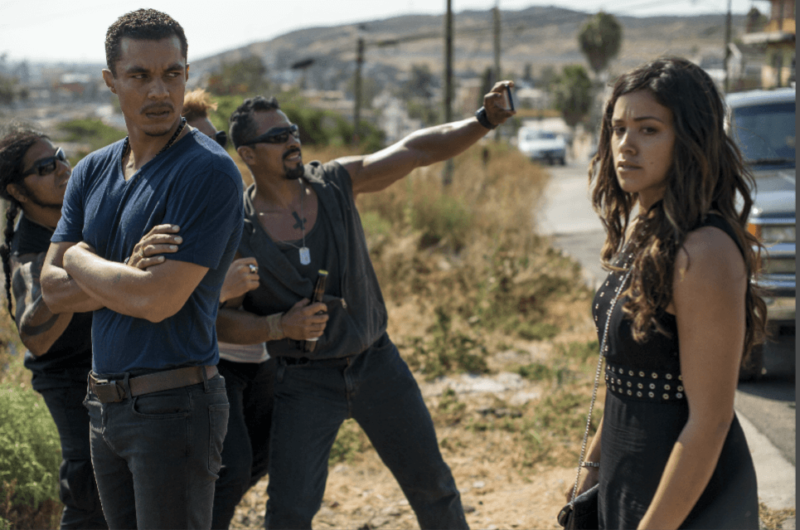 NEW YORK — “Miss Bala” (Columbia), director Catherine Hardwicke’s remake of a well-received 2011 Spanish-language film, is meant to be the tale of an ordinary woman discovering her inner toughness when placed in extraordinary circumstances.

But those in search of something more than the climactic spectacle of Gina Rodriguez in an evening dress toting a high-powered rifle will come away disappointed.

Rodriguez plays initially mild-mannered, somewhat put-upon Los Angeles makeup artist Gloria. While Gloria is visiting her best friend, Suzu (Cristina Rodlo), in Tijuana, the two go out to a nightclub where they witness the attempted assassination of a local official.

In the chaos that follows, Suzu disappears. But when Gloria turns to the police for help finding Suzu, and offers to identify the culprits in the failed rubout, she discovers that the officer to whom she has entrusted herself is in the pay of the powerful drug cartel behind the hit. The leader of this gang, Lino (Ismael Cruz Cordova), promptly arranges for Gloria’s abduction.

After Lino blackmails Gloria into playing an unwitting role in the bombing of a DEA safehouse, she makes a break for it but winds up being kidnapped again, this time by DEA agent Brian (Matt Lauria). Brian threatens to send Gloria off to the penitentiary for decades unless she helps him catch Lino. Clearly, this girl can’t get a break.

Improbabilities abound along Gloria’s odyssey. And there’s little of note going on during her journey beyond a complex and charismatic performance from Cordova, who manages to make the Gloria’s in-spite-of-herself connection with Lino seem somewhat believable.

Gareth Dunnet-Alcocer’s script tries to give Lino some humanity and depth. So it’s in character when he abandons a plan to compel Gloria to have sex with him (the two are interrupted at the moment of truth) and instead contents himself with caressing her hand while lying next to her in bed.

Though rampant corruption leads to a muddying of the moral waters — it’s hard to tell the good guys from the bad — the mayhem on screen is mostly bloodless, and the sexuality, as typified when handholding replaces rape, restrained. That makes “Miss Bala” acceptable for a wide swath of grownups.

The film contains considerable stylized violence, including gunplay and explosions, with only slight gore, a narcotics theme, some sensuality, brief partial nudity, at least one mild oath, a couple of rough terms and several crude expressions. The Catholic News Service classification is A-III — adults. The Motion Picture Association of America rating is PG-13 — parents strongly cautioned. Some material may be inappropriate for children under 13.