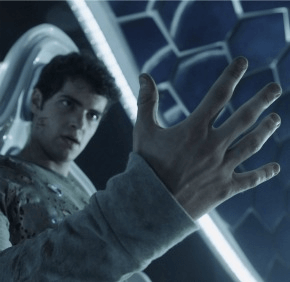 By Joseph McAleer
Catholic News Service
NEW YORK – Yet another action figure leaps off the toy store shelves and onto the big screen in “Max Steel” (Open Road), the coming-of-age chronicle of a Mattel-made superhero.
A human-alien hybrid (think G.I. Joe crossed with a Transformer), the eponymous creature fights for truth, justice and you-know-what in the spirit of Superman and all those Avengers.
In an origin story borrowing heavily from the “Spider-Man” canon, Max McGrath (Ben Winchell) is a gangly 16-year-old trying to fit in at his new high school. His mother, Molly (Maria Bello), is smothering but supportive. Things improve when the cutest girl in school, Sofia (Ana Villafane), takes a shine to Max.
But soon the supposedly abandoned power plant next door starts to rumble, and so does Max — and it has nothing to do with raging hormones. Instead, Max discovers that his body radiates the universe’s most powerful energy.
That’s a lot for a teenager to absorb. Fortunately, Max meets Steel (voice of Josh Brener), a wisecracking robot designed to protect him from intergalactic evildoers called Ultralinks.
When the two are symbiotically linked as “Max Steel,” the resulting dynamic duo resembles a silvery version of Iron Man, with turbocharged weapons and the ability to fly.
When he’s not too busy vanquishing baddies or doing his algebra homework, Max searches for clues about his plight. Molly has been mum on what really happened to Max’s father, Jim (Mike Doyle), a brilliant scientist who died on the brink of a new discovery.
Jim’s associate, the mysterious Dr. Miles Edwards (Andy Garcia), carries on his work. But he spends a lot of time whispering to Molly, raising Max’s suspicions.
Director Stewart Hendler, working from a derivative script by Christopher L. Yost, pulls out all the stops in the smash-bang climax of a movie that is, overall, mindless goofy fun.
Clearly aimed at youngsters, “Max Steel” is possibly acceptable for older adolescents.
The film contains cartoonish violence and one use of the F-word. The Catholic News Service classification is A-III — adults. The Motion Picture Association of America rating is PG-13 — parents strongly cautioned. Some material may be inappropriate for children under 13.
Copyright ©2016 Catholic News Service/U.S. Conference of Catholic Bishops.
See more movie reviews here.
PrevNext