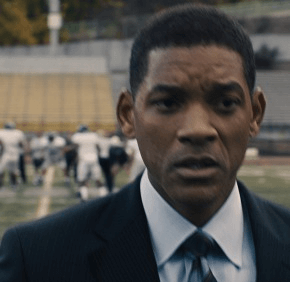 NEW YORK  – Neither the National Football League nor the Federal Bureau of Investigation comes off particularly well in the fact-based drama “Concussion” (Columbia).

But the film’s central figure, the Nigerian-born coroner Dr. Bennet Omalu (Will Smith), certainly does.

Given that Omalu’s generally admirable character is portrayed as being shaped, more than anything else, by his devout Catholic faith, believing moviegoers will find much to enjoy in this uplifting profile.

Omalu gained fame – and initially stirred controversy – as a result of his discovery that repeated jolts to the brain, such as those sustained on the gridiron, can cause a degenerative disease called chronic traumatic encephalopathy, or CTE. The then Pittsburgh-based pathologist, an expert in neurological forensics, came to this conclusion after studying the body of Steelers’ Hall of Fame center Mike Webster (David Morse).

Webster had suffered a mysterious mental and emotional decline before his untimely death of a heart attack at age 50. As “Concussion” shows us, a number of the League’s other veterans found themselves caught in a similar downward spiral. For some, the disintegration ended in suicide.

Together with his celebrated and supportive boss, Cyril Wecht (Albert Brooks), Omalu publishes his findings. They win him the backing of the Steelers’ former team physician, Julian Bailes (Alec Baldwin). But they also draw fierce opposition from the NFL whose in-house medical staff – led by the team doctor of the New York Jets, Elliot Pellman (Paul Reiser) – schemes to vilify the outsider and discredit his research.

The perils of taking on an institution that, as Wecht puts it, “owns a day of the week, the same day the church used to own,” are amply illustrated. As depicted here, they culminate in Wecht’s arrest by the FBI on charges that were ultimately dismissed – and that the screenplay clearly implies were trumped up in the first place.

Since Wecht’s indictment could compromise Omalu’s employment situation, and therefore his immigration status, things begin to look grim for the avidly patriotic would-be American. He finds a source of moral support, however, in the person of fellow immigrant Prema Mutiso (Gugu Mbatha-Raw).

At the urging of his priest, solitary Omalu has given this newcomer – a Kenyan native – shelter as a boarder in his apartment. As the clergyman no doubt foresaw, she enlivens Omalu’s moribund social life; as he may not have expected, she also wins Omalu’s heart.

Recommendation for a younger audience is hindered, however, by the fact that Omalu’s Christian morals do not extend to the bedroom. At his unspoken invitation, Prema joins him there well before there’s any question of her meeting him at the altar.

Additionally, the script throws up some salty language. Although not excessive, these wayward words serves to reinforce the idea that patrons would do well to approach “Concussion” armed with a sound helmet of maturity.

The film contains gory medical images, a premarital situation, about a half-dozen uses of profanity, a couple of rough terms and occasional crude language. The Catholic News Service classification is A-III – adults. The Motion Picture Association of America rating is PG-13 – parents strongly cautioned. Some material may be inappropriate for children under 13.