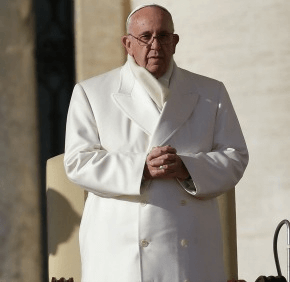 VATICAN CITY  – The Christmas season is a time to learn from baby Jesus to let go of selfishness and be humble and giving as he is, Pope Francis said.

In fact, people should take the little figurine of Jesus from their Nativity scene and kiss it, “and tell Jesus, ‘I want to humble like you, humble like God,’” the pope said Dec. 30 during his weekly general audience in St. Peter’s Square.

The pope dedicated his catechesis to the importance of contemplating baby Jesus. The Christmas season offers a timely occasion for this reflection, since many people customarily set up a Nativity scene at home, he said.

Pope Francis said the figure of the holy infant in his simple crib invites people to adore the child Jesus and to contemplate the mystery of the incarnation as a revelation of God’s saving love.

“In order to grow in the faith, we need to reflect more often on baby Jesus,” who came into the world in such a humble way “for us,” he said.

“This is a great mystery: God is humble. We, who are proud, full of vanity, who think we’re a big deal, yet we’re nothing. He is great, he is humble and he became a child. This is a true mystery. God is humble. This is beautiful,” the pope said.

While the New Testament offers few accounts of Jesus’ infancy and early childhood, the pope said people can still learn a lot by looking at the children in the world.

“We discover, most of all, that children want our attention. They have to be at the center of attention – because they’re proud? No. Because they need to feel protected,” he said.

“We, too, have to put Jesus at the center of our lives and realize, even if it seems paradoxical, that we have a responsibility to protect him.

Just as being affectionate to a child can make him or her smile, people can “make baby Jesus smile by demonstrating our love and our joy because he is among us.”

“His smile is a sign of that love that gives us assurances of being loved,” the pope said.

Children also show that when it’s playtime, adults have to let go of their own mindset and enter into the world of that child, the pope said. “We have to understand what he likes and not be self-centered and make him do what we like. It’s a lesson for us.”

“Before Jesus, we are called to let go of our pretension of autonomy – and this is the heart of the problem, you know, our pretense of autonomy – in order to embrace instead the true form of freedom, which consists of recognizing whom we have before us and serving him,” he said.

“He, the child, is the son of God who comes to save us. He came among us to show us the face of the father so full of love and mercy. So hold the baby Jesus tight in our arms and let us put ourselves at his service. He is the source of love and serenity.”