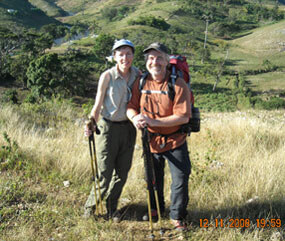 It came while he was completing a five-mile run with a 30-pound pack strapped to his back to prepare for his first climb of Africa’s Mount Kilimanjaro.

At the time, Fallesen was a journalist, who had worked for 27 years at the Democrat and Chronicle newspaper in Rochester, N.Y., as a sports and outdoor writer and columnist. He was living his dream and had wanted to be a journalist since childhood.

“I never really thought about going in any other direction,” explained Fallesen. “God had other plans.”

He started climbing in 1996 after he started covering outdoor recreational activities for the newspaper. He had written stories about a mountain climber who once took him on an excursion to Washington’s Mount Rainier. At that point, he was hooked on climbing. Eighteen months later, he climbed Mount Kilimanjaro and it was while training for the trip that he thought of Climbing for Christ.

Fallesen said that it took him a few years to get the organization started, but he knew from the beginning that it was going to be an international ministry.

“As soon as it got online, we picked up members,” he said. “God continued to open the doors. I just had to walk through them.”

After being housebound for four days as the result of a snowstorm during a climbing expedition in the Alaska Range, Fallesen spent a lot of time discussing faith with a friend and reading the book “Don’t Waste Your Life,” by John Piper, a Baptist pastor in Minneapolis.

“I came back from that trip and knew that I wasn’t going to finish my life as a journalist,” said Fallesen. “I loved what I did, and was pretty good at it and all of a sudden God just told me that this was the new direction I was going to go.”

Climbing for Christ, C4C for short, currently has more than 1,000 members in 47 countries. The Web site is www.climbingforchrist.org.

Fallesen emphasized the organization is not just for experienced climbers.

“You don’t have to be climbing 8,000-meter peaks,” said Fallesen. “We have members who have never climbed a mountain and probably never will, but they are supporters.”

Members also can fulfill the organization’s mission by visiting mountainous areas of the world as missionaries, sharing the Gospel with people who otherwise might never hear it.

Mollie Olson, 26, who lives in New Hampshire, heard about the organization through a friend and was intrigued with the opportunity to perform mission work. Olson spent four weeks on a missionary expedition to Mount Kilimanjaro, where she explained that her faith was deepened by reaching out to others.

“I respected their philosophy of showing Jesus to the people they encountered in a way that was compassionate and relatable to the people we are interacting with,” she said. “During that time in Africa, my faith was developed through seeing God’s provision in my life. Time and time again. God met my needs. That experience in Africa has taught me to trust God in other things.”

Climbing for Christ missionaries have devoted their time to projects in Haiti, the Dominican Republic, Nepal and Mexico. In the future, missionaries will also serve in Tanzania, the Philippines, China and Turkey.

“We are blessed to boulder (rock climb) all over the world,” Fallesen said. “We go as missionaries where others cannot get to or will not get to. We are mountain climbers so we can go into mountainous villages that people don’t even know exist.”

Climbing for Christ breaks down religious barriers and works as one body of Christ, says Fallesen. One of the key players, Fallesen explained, is a Catholic worker who lives in Haiti 10 months of the year.

“She is amazing,” said Fallesen. “She is fluent in Creole, and with her help we have been able to accomplish so much.”

The organization is free to join and encourages a member’s entire family to get involved. It offers many opportunities for members who want to go on mission trips, have access to prayer teams and receive a quarterly magazine, e-newsletters, updates and alerts.

“We want you getting out into his creation and spending time with the Creator,” Fallesen said. “You have an opportunity to serve the Lord through something you love to do and in a very unique way. We are being sent to do things that others can’t.”