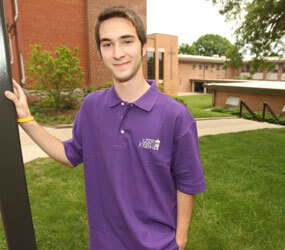 Need a take-charge guy to preside over the student council?

Want to make sure that the soccer team has a following on the road?

Does an underclassman need the guidance of a tutor before the chemistry exam?

Matthew Thomas Gorman filled all of those roles and many more in four years at Mount St. Joseph High School, as it was a rare day in Irvington that he wasn’t leading, inspiring or helping his schoolmates.

Matt secured early entry to New York University on the basis of a fine academic background. It includes a weighted grade point average of 4.5, a senior course-load that included four advanced placement courses and total emergence in the life of Mount St. Joseph.

At graduation May 29, the student council president received the Brother Bernardine Award, which goes to the senior who has “given the most of himself to make Mount St. Joseph an exceptional school.”

Consider the opinion of principal Barry Fitzpatrick, and his 23 years on the staff at Mount St. Joseph.

“I never met a student body president who worked harder at finding out what it was his classmates needed or wanted, and then tried to deliver on it,” Fitzpatrick wrote in an e-mail. “There was a general opinion among his classmates that he truly had their interests at heart, and they all felt comfortable around him.

“He was one of the brightest guys in the class, but never came across as superior. He was a genuine servant leader.”

Matt points to Fitzpatrick for making “me more confident around people,” emphasizing the irony, that a young man comfortable in front of a group began his schooling as the quietest kid in class.

“In pre-school and kindergarten, I talked to no one,” Matt says. “I talked at home, but the people at school thought something was wrong and I was sent to the counselor. Now, people joke, they can’t get me to shut up.”

The co-president of the Spirit Club, Matt ensured that every Gaels’ team was backed.

“I love supporting all of our people and all of our teams,” Matt said. “We drove all over Baltimore, for football, ice hockey. Sometimes we’d go, just so there was someone in the stands.”

That spirit spread throughout the Class of 2009, as its optional retreat to Buckeystown attracted more than half of its 250 members.

“Every class says they feel a brotherhood, but I think ours was unique,” Matt said. “We got hooked on the John Legend song, ‘If You’re Out There.’ If you hear it, you start singing it, and every senior picks it up.”

That sense of fraternity can be traced to his parents. Maria was raised in northeast Baltimore and Tom was commissioned out of the U.S. Naval Academy.

Their loyalties include St. Louis in Clarksville, as the three Gorman boys attended its parish school even as the family moved from Ellicott City to Mount Airy. All graduated from Mount St. Joseph – Alexander in 2006 and Patrick in 2008.

In New York, Matt hopes to get a foothold in the media business. He’s already an accomplished photographer, as an image he captured in Rome in 2007 won a prize at the Howard County Fair.