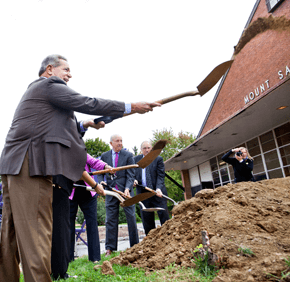 The $18.5 million athletic construction project is the second of a three phase project, part of the Irvington school’s Campaign for Mount Saint Joseph: Building Men Who Matter.

Brother James initiated the project, said Andrews, who called it “a new turning point for the Mount.”

To navigate a slideshow of the event, click on the arrrows below.

The project is expected to be completed in spring 2014.

“They’re (students) going to have the finest athletic facilities in all of Baltimore,” Andrews said.

The final phase of the campaign will include the renovation of the baseball field and new tennis courts, said Emily Rollins, the school’s executive director of development.

Phase I of the campaign, completed in 2008, included the construction of the school’s stadium, track, turf field and a pedestrian bridge connecting classrooms and athletic facilities.

Sophomore Matthew Hostutler, who plays JV football at the school, “can’t wait” for the new facilities, particularly the new locker rooms. He expects them to be less cramped.

“This will be the jewel of the campus,” said Loovis, who noted every student will use the facilities, from students in physical education classes to student athletes.