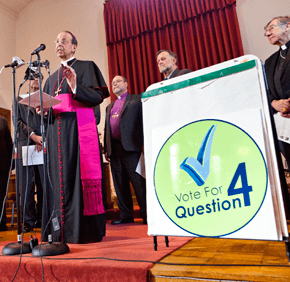 The DREAM Act offers “hope and promise” for immigrant students, Archbishop Lori said at a press conference sponsored by the Ecumenical Leaders’ Group of the Central Maryland Ecumenical Council. The conference was held at Morgan State University Chapel in Baltimore.

“We’re here to support the DREAM Act as a fair measure that allows young women and men who have worked hard, speak our language and call this land their home, to be able to realize their full, God-given potential,” he said. “Most have come here through no fault of their own at a very young age, and they ask that they only be given the same chance to pay in-state tuition as every other Maryland student.”

The DREAM Act is about the benefits of education and giving the next generation a chance, Archbishop Lori said.

“By supporting the DREAM Act, we’re doing just that – allowing young people to come to the full understanding of who they are before God,” he said, “and allowing them to develop all the gifts, all the talents God has given them.”

Archbishop Lori said he joins other religious leaders in praying that Marylanders will support the DREAM Act by voting for Question 4 on the Nov. 6 ballot.

Passed by the state’s Legislature in 2011 but now facing public referendum, the Maryland DREAM Act ensures that students who have graduated from a Maryland high school and meet certain other criteria are eligible for in-statue tuition rates at Maryland colleges and universities, regardless of their legal status. The Maryland Catholic Conference, which advocates for public policy on behalf of the state’s bishops, are coalition members of Educating Maryland Kids, an organization working to ensure the law is upheld.

Between each religious leader’s remarks, a petition was offered by Rosalitta Jayjay, 24, an immigrant from Liberia who holds U.S. asylum but is not eligible for in-statue tuition. She left Liberia in 2003 with her mother and six siblings to escape war, she told the Catholic Review.

A student at the Community College of Baltimore County in Essex, Jayjay said being able to pay in-state tuition would help her afford college and achieve the “American dream.”

“It will help me achieve things I never thought I could achieve as an immigrant,” she said.

Other religious leaders who gave remarks included Bishop Eugene Taylor Sutton of the Episcopal Diocese of Maryland; the Rev. Frederick K. Weimert, Central Maryland Ecumenical Council president and pastor of Calvary Baptist Church in Towson; the Rev. Alvin J. Gwynn Sr., president of the Interdenominational Ministerial Alliance and pastor of Friendship Baptist Church in Baltimore; Bishop Wolfgang Herz-Lane of the Delaware-Maryland Synod of the Evangelical Lutheran Church in America; the Rev. David S. Cooney, assistant to Bishop Marcus Matthews of the Baltimore-Washington Conference of the Untied Methodist Church; and the Rev. Peter K. Nord, general presbyter of the Presbytery of Baltimore of the Presbyterian Church.

Morgan State University is one of the public institutions that DREAM Act-eligible students would be able to attend should the law be upheld.

The DREAM Act applies to students whose families pay Maryland taxes. Under the law, DREAM Act-eligible students must attend a community college for two years or 60 credits prior to transferring to a four-year state college or university, where they would be considered for admission with out-of-state applicants.