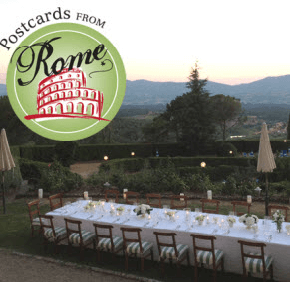 When Cardinal Edwin F. O’Brien was a young priest assigned to St. Patrick’s Cathedral in New York, he met a medical school student from Austria who was studying in Manhattan. When the med student was married and had his first son, he invited then-Father O’Brien to come to Boston to baptize the newborn child. Twenty-eight years later, the boy he baptized invited the cardinal to witness his marriage. Last month, I traveled with the Cardinal to the small town of Donnini in Tuscany where the Cardinal celebrated the wedding. It was a joyful Mass celebrated in English, Latin, Italian and German. The couple resides in Austria.

Following the Mass, we were treated to an outstanding celebratory dinner at a nearby villa. Pictured here is the table from which we had a breathtaking view of the Tuscan countryside.

We pray for all married couples and those preparing for marriage that Our Lord may be always at the center of their relationship!